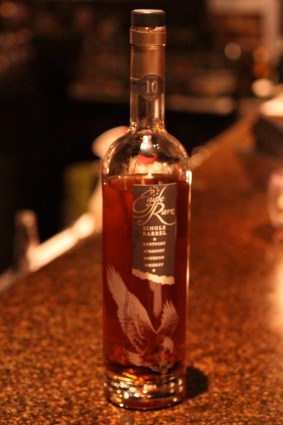 The first time I tried Eagle Rare 10 Year, I was already several drinks (and a hardy several at that) deep at a fairly rowdy work event. My co-worker had purchased it for some occasion or other, and in his alcoholically-amalgamated generosity, proffered a taste of it to me. I was fairly confident that I wouldn’t be able to appreciate it in my state, and I told him so. Pressed on, I did indeed give my best shot at tasting it. And what a taste it was.

Primarily, I’m a Scotch man when it comes to whiskey. When it’s not Scotch, it means I’m usually on a tighter budget, and Rye becomes my drink of choice. Thus, my appreciation of Bourbon was peripheral at best, and my exposure to it was generally relegated to the bottom-shelf variety. Eagle Rare was, and remains, an entirely different Bourbon beast for me.

Eagle Rare bears all the characteristics of a classic Bourbon (which you can read about in my post What’s a Whiskey?), but does it in such a seamless way that it comes together in something tantamount to perfection. I love smoky whiskeys, but unlike an Islay Scotch, which has a kind of heavy wet smoke (think damp moss tossed on a fire), Eagle Rare has this great dry smoke smell and taste (think charcoal barbecue).

The taste is complex, dense, and harmonic. Lot’s of mocha, a bit of orange zest, and this lovely toffee that rounds out the more acrid characters of the charcoal smoke. All in all, a most satisfying beverage that I would highly recommend drinking neat; there’s not one flavour in Eagle Rare I’d care to dilute.

While I never used to think I’d be a bourbon guy, Eagle rare caused me to change my mind. It was indescribably nice to shake things up with something a bit more zesty than I had become accustomed to. So if you see this bird in the liquor store, do your self a favour and pick it up, pour yourself a dram (neat, if you please) and sip it mighty slow.

Sipping With Smoth: Unlocking the Case for Rubicon's 'Cask Cabernet'