When you think of James Bond’s drink, you think of – well you know what it is. But it’s not simply agitated vodka drinks the suave spy goes in for – it’s bourbon too.

In the 2011 Bond novel Carte Blanche, James keeps Basil Hayden’s as his bourbon of choice at his flat.

Frankly, that’s no surprise – the lavish paper poncho and wood/metal band smack of the kind of refinement a man who wears tuxedos casually would go in for.

While 007 is a savant in any number of espionage, martial and presumably romantic skills, his whiskey sipping ones appear to be rather weak. Because Basil Hayden’s is an unfortunately bland bourbon, well overpriced and overwrought.

I was hyped when I first tried this whiskey. While I’m no lover of Jim Beam (the owner of Basil Hayden’s) their “premium” lineup of whiskey like Knob Creek 9 continues to impress me.

Needless to say, I was more than a little disappointed. To start, Basil Hayden’s has a mere 40% ABV, which in and of itself isn’t a bad thing, but tends to indicate a more “accessible” beverage like Blanton’s Special Reserve, something I found quite boring.

Basil Hayden’s pours a very light copper in the class, looking distinctly pre-diluted. On the nose it does manage to provide a bit of hope, with cinnamon, nutmeg, baking spices, and a touch of roast almonds. It’s subtle, but not uninspired.

On the tongue, Basil Hayden’s falls apart. It’s got a thin body that fails to sit well, and reminds me of black tea. It’s got a decent amount of rye spice, but it’s almost as if someone turned the volume knob on it down.

There’s a pleasant nuttiness, with a touch of bread, but it gives you a headache trying to parse the flavours out.

On the finish, Basil Hayden’s reveals its final disappointment – a potent, unpleasant bitterness which overwhelms any sweetness. I normally don’t mind bitter (I take my coffee black) but Basil Hayden’s taste is off enough that after a couple sips I’m ready to tap out. 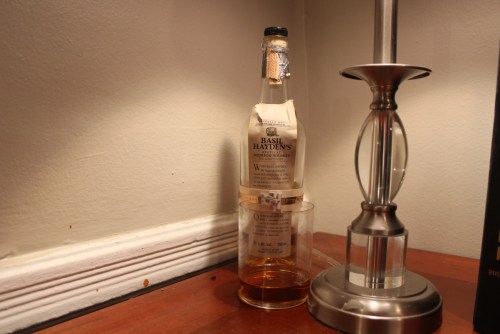 Personally, I don’t know what Bond saw in this whiskey. Presumably the outward aesthetics drew him to the bottle, and its large price tag appealed to his sense of class. But after one sip, the cunning spy would surely have opted back to the vodka martini. Because Basil Hayden's is a bland, uninspired bourbon that costs far too much, and is definitely one you won’t have to sip slow.