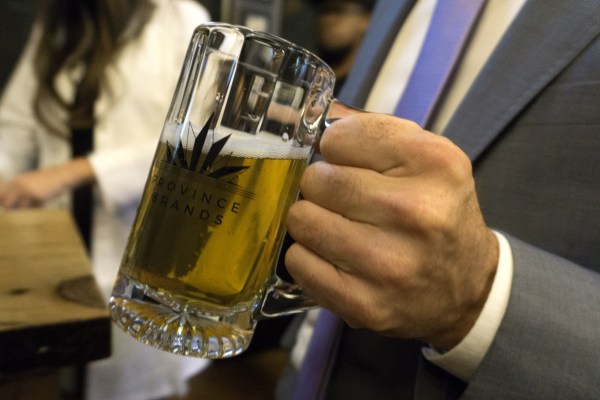 It’s not the first time I’ve written about non-alcoholic beer before. Hell, it’s not even the first time I’ve written about Toronto-based Province Brands and their cannabis beverages. But with Canadian legalization looming right around the corner (the current target is mid October), Province Brands has officially announced that it will be launching a cannabis-infused beer (for those German beer purists among you that crave grain in your stein) to complement their cannabis-brewed beer.

This beer will be brewed like any other conventional beer (albeit non-alcoholic) and then infused with oil supplied by partner Element GP, a producer of up-scale cannabis products.

“With our combined technologies and expertise in the cannabis and beverage marketplaces, this will be a very powerful and complementary alliance within the international cannabis industry,” said Christopher Lecky, Co-Founder and COO of Element GP.

I had the chance to speak with Dooma Wendscuh, CEO and Co-Founder of Province Brands, on the phone and ask some more about the nitty-gritty of his new product. If you’ve ever had the chance to consume cannabis as an edible (or drinkable) you might recall some terribly potent effects. A long, intense body high is not uncommon. But Province has made a commitment for a cannabis-centered beverage that mimics the potency and duration of conventional alcoholic beer.

“Our decelerant technology is the first of its kind. Other marijuana beverages will keep you high for up to 6 hours,” Wendschuh explained. “We want people to be able to have one beer, and than another beer if you want to. If you go to a sports game you’re not just going to want to have one beer.”

“Our technology shortens the high, but it does it in such a way that you can still get high if you have another beer. Other technology will sober you up, but it will prevent you from getting high again.” But every beer fan knows it’s about more than just the buzz. The taste is even more important than the intoxication.

Where Province’s cannabis-brewed product will be a departure from traditional beer taste, their barley-brewed version will be a lot more familiar. But the infusion of cannabis oil does pose its challenges.

“It depends on the style of course, but it will be a lot more like beer you’re accustomed to. It will taste very familiar, but will be non-alcoholic of course,” Wenschuh explained. “We have found there’s a generally unpleasant flavour with any oil, a bitterness, but a quite nice aftertaste. We’re developing ways to mask the bitterness and showcase the aftertaste.”

Wendschuh told me that a lot of these deleterious flavours can be masked by brewing a potently hoppy beer. And it wouldn’t be out of character at all for an up-and-coming brewery to launch with a flagship IPA. But that’s not the direction Province Brands is interested in heading — at least not yet.

“The hoppier the beer, the better you mask the flavour. If you wanted to take the easy route, you’d start with an IPA, but we’re probably not gonna do that,” he said. “I think if you’re starting you’re company, and you’re doing something, you should start with the hard stuff first.”

“We’d like to be a little more subtle and artful. We really are a brand that prides itself on our craftsmanship.”

Like all other companies, Province is waiting with bated breath until marijuana legalization hits Canada. For the cannabis connoisseurs, their flagship beer that eschews grain for weed will be an enticing offering. And for those who’d like something a little more familiar, their barley-based, cannabis-infused beers will certainly warrant a slow sip or two — if you’re into that kind of thing.

Yamazaki Distillery Tour: A Behind the Scenes Look at Japan's Premier Distillery

Behind the Beer, Whisky