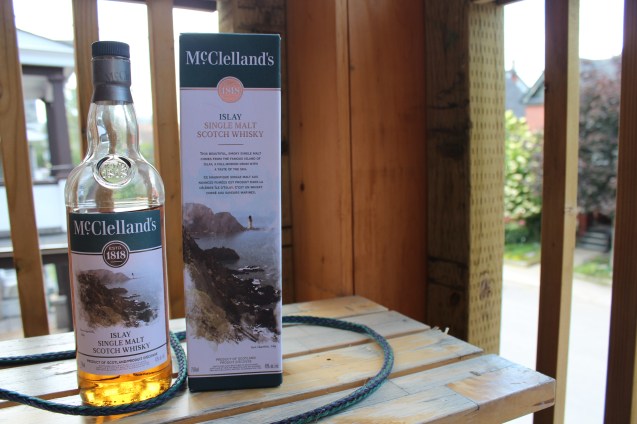 William Faulkner once said, “There is no such thing as bad whiskey.” This proves two things: 1. Faulkner really liked whiskey and 2. He had never tried McClelland’s Islay Single Malt Scotch.

Listen, I understand being on a tight budget. Really, I do. And I also understand the deep and powerful love that Scotch can instill, transcending financial responsibility. But I caution you against trying to be fiscally prudent and indulging your single malt fetish at the same time (like I did) when I bought the $35 McClelland’s Isaly.

That’s right. Thirty-five dollars. For a single malt. I stared in disbelief for some time before I shook off all judgment and bought a bottle for myself. The first thing that struck me about my new purchase was that there was no age for the whiskey. “Huh,” I thought. “Must be online!” Nope. No mention of the age on either the bottle or the McClelland’s website. But for $35, I was willing to give it the benefit of the doubt. After all, it was a single malt Scotch. How bad could it be?

Bad. Very bad. McClelland’s is simply one of the least pleasurable fluids to have ever entered my body. It smelled like an old medicine cabinet set on fire. Sure, there was the classic Islay smokiness. Yet, instead of that warm, complicated, bracing peatiness I love, there was nothing so much as the stinking fumes of burning plastic. And that wasn’t half so bad as the taste.

It says right on the McClelland’s website that their whiskey finishes with a “hint of iodine.” While essences of iodine are more than welcome in many Scotches, McLelland’s decided to take it too far by literally converting their whiskey into a bottle of the aforementioned disinfectant. It was gag worthy, like drinking the fluid resulting from ringing out an old bandage. There was the peat smoke, and some wood, but the smoke tasted toxic, and the wood like rotting cedar. I can’t convey strongly enough how unpleasant drinking McClelland’s Islay Scotch was.Thankfully, a friend came over already under the influence of some finer fluid and was willing to put an enormous dent in the bottle for me, and I was spared the task of finishing it (or dumping it) myself.

Faulkner also once said, “Pouring out liquor is like burning books.” But I think he’d make an exception for McClelland’s Islay. So is there no hope for Scotch sippers on a budget? Well, unfortunately, not much. However, Aberlour 10 year Highland Scotch comes in under $50, and is very pleasant. If you love the peaty kick of Isaly, try Bowmore 12 Islay, the big smoke of the island for about $55.  Both are infinitely preferable to the untenable McClelland’s.