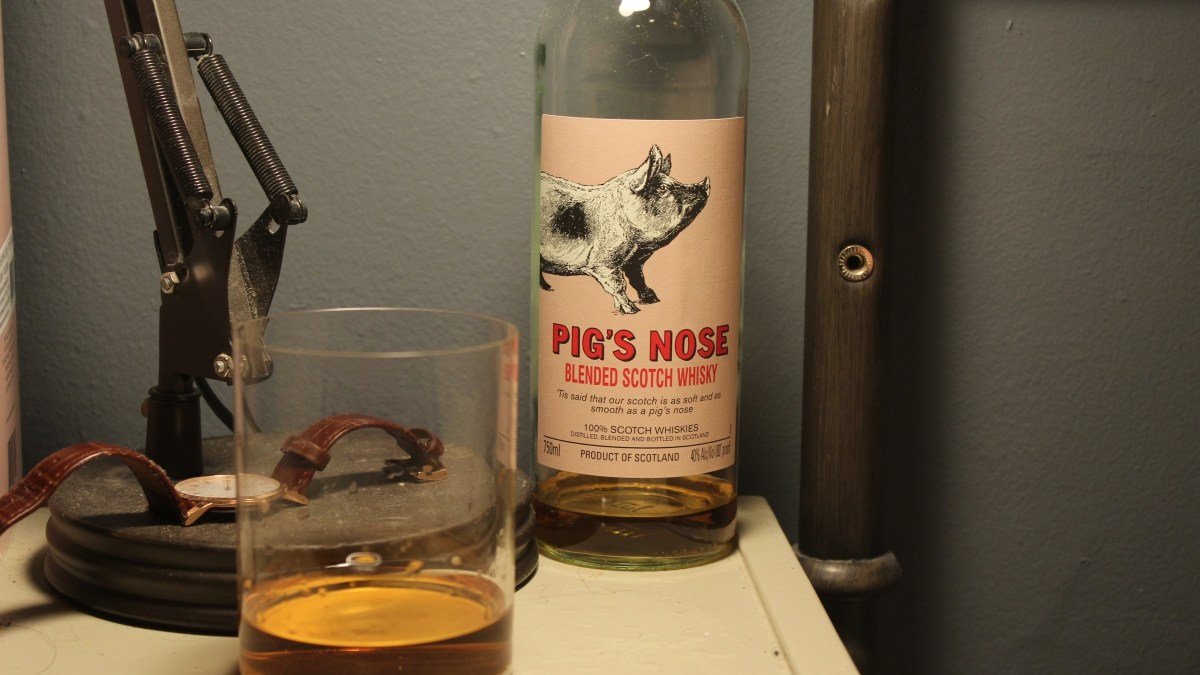 Like many self-proclaimed scotch enthusiasts, I give far more attention to Single Malt’s than I do to blends. Not because Single Malt’s are inherently better (although in my experience they have been), but because if you’re going to drop money on a scotch, you want it to be a sure thing — and I find blends to be inconsistent brand-to-brand (although more consistent year-to-year than many SM’s). Thankfully, I have wonderful friends who give scotch as gifts, allowing me to try the immensely drinkable Pig’s Nose Blended Scotch Whisky.

The branding of Pig’s Nose is so charming, I may just keep the box for aesthetic value. With its porcine-pink, bold font and smirking-snout graphic, Pig’s Nose makes for an excellent gift bottle for a not-too-uptight scotch drinker. No scotch reviewer should be overly enamoured by the bottle the drink comes in, but in the case of Pig’s Nose it’s hard not to be impressed.

Bearing No Age Statement (NAS), Pig’s Nose looks suspiciously dark — I think they may have gotten a bit cavalier with the caramel colouring. Nonetheless, it pours clear and viscous. On the snout, Pig’s Nose is a tad harsh with a big hit of alcohol and some iodine. After the initial hit, however, it mellows into some toasted almond and peaches, which gave me some hope for the palate.

The taste is super grainy. I put “super” in italics, because it goes without saying that scotch is going to taste like grains — it’s made with them. But Pig’s Nose tastes most like a big bowl of whole-flake oatmeal. There’s a bit of a molasses flavour underlying the oats, and even some dried fruit. Pig’s Nose has a tiny bit of medicinal undertone, and a pleasant nuttiness. It’s not perfect, of course. There’s a bitterness to it that I didn’t dig, and it was a tad simple (ok, boring even.) But overall, and especially considering the price, it was an enjoyable sipping whiskey, nearly as fun to look at as to drink.

Would I recommend this to a snooty single-malt sipper? Nah. But as a gift for a cool Dad, or for someone who likes to try a new scotch and has a penchant for chuckle-inducing pig imagery (like yours truly), Pig's Nose might fit the bill. In the end, it's a blended scotch that's worth sipping slow.