I should preface this review by noting I had the good fortune of being mailed coupons for 12 free Brutal Brewing’s Pistonhead Kustom Lagers from their PR team for reviewing purposes. It has just recently hit The Beer Store in Ontario, and they’re trying to drum up some promotion. Tempted as I am to give a great review to anyone who sends me free beer (you reading this Flying Monkeys?) I decided to sit down and give Pistonhead as fair of a shake as I could.

The first thing to note is that Pistonhead is a light, European-style lager from Sweden. It also has a distinct matte-black can with a flaming skull on it, making it difficult to discern from a new energy drink line. This automatically threw me a few hurdles, as I’m not typically a fan of either European lagers or light beer (or energy drinks, for that matter.) However, this being one of the most popular beer styles in the world, I figured I’d compare it to a couple of its popular peers, like Heineken and Stella Artois.

Pistonhead pours bright and clear with a fizzy white head. It certainly looks like most lagers you’d be familiar with, although perhaps with just a tad more colour than Stella or Bud. It smells subtle, somewhat grassy with a touch of citrus and even a hint of something floral. It’s a bit more complex than your garden variety, and that’s apparent even before the taste.

That said, after one sip my tasting note amounted to, “Well, that certainly tastes like beer.” In essence, Pistonhead is a simple session beer, without much to it. I buckled down, really thought about it and sipped it quite slowly to render any sort of tasting notes. What I could taste, however, was pretty good. The maltiness was fairly rich, and a bit more bready than your average shit-tier lager. Beneath that, there was a crisp bitterness, evocative of a decent German pilsner, which gave it a refreshing quality lacking from many lagers. And that’s the thing: At only 4.6% alcohol, and mild and refreshing as it is, I put a surprisingly large dent in my free Pistonheads the first night I had them. Light-weights beware.

Compared to Heineken and Stella, two beers I believe to be comparable in style and price, I think Pistonhead is superior. It’s a tad more complex, with a more interesting flavour profile and a cleaner finish. Most importantly, it lacks the metallic, mass-produced taste that ruins both Stella and Heineken for me. And as a bonus, a 6 pack of Pistonhead is 5 cents cheaper than its competitors. It’s hard to beat. 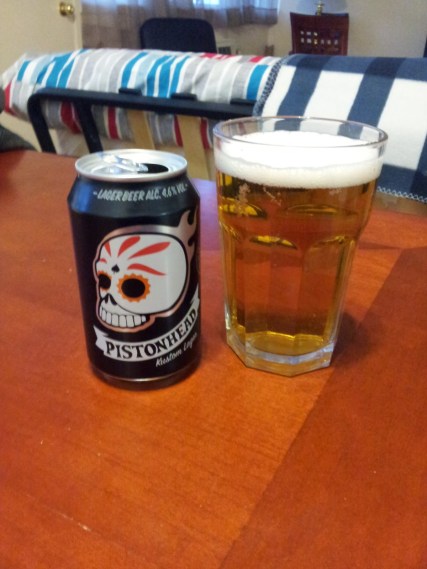