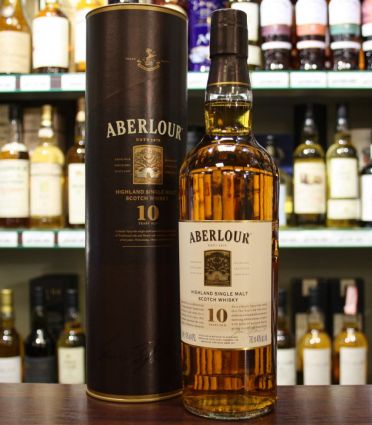 Many uninitiated Scotch drinkers are a little wary when approaching the legendary beverage. Its potent flavours, high alcohol content, hefty reputation and steep price can be enough to scare off all but the most stalwart drinkers. Thankfully, Aberlour 10 Year Old Highland Single Malt Scotch exists for everyone else, and is one of the most approachable whiskies I’ve ever had.

Think of a big Islay bastard like Lagavulin 16 (which you can read about in my post here). The extreme smokiness and potency will drive away any inexperienced would-be scotch enthusiast. Also, the high price is undoubtebly going to be a deterrent.That doesn’t mean the Lagavulin isn’t fantastic (it is), it just means that generally there are better entry-level Scotches.

The Aberlour 10 meets all the criteria required for an introductory whisky. It possesses a more subtle, sweet scent, a pleasant bright gold colour, and is on the cheaper side of single malts, coming in at under $50. It’s a Speyside, meaning it lacks the intense peat smoke of Islays like Lagavulin. But more important than that, it bears the quality required to impress even a seasoned Scotch drinker’s palate.

It has a rich, sweet, toffee flavour, reminiscent of sucking on a Werther’s Original candy. However, the sweetness is offset by just a touch of allspice and a hint of black pepper. It’s a sweet, creamy Scotch, but the background spices are enough to provide a lovely complexity, preventing Aberlour 10 from getting boring after a few sips. The finish resembles nothing so much as warm caramel drizzle, except without the unpleasant stickiness. It would go great with a piece of pie after dinner, and even someone unaccustomed to the alcohol kick can appreciate the simple, friendly flavours of Aberlour.

Don’t get me wrong, I have no pretensions about this being an elite Scotch. It’s not overly thought-provoking, complex, or flavour-dense. But it’s immensely affordable and incredibly enjoyable. It’s a sweet, simple Speyside that invites the uninitiated, all while remaining satisfying for the more informed imbibers. So if you’re interested in discovering Scotch, there’s no better place to start than Aberlour 10. It’s so approachable, you’ll have no reservations about sipping it slow.