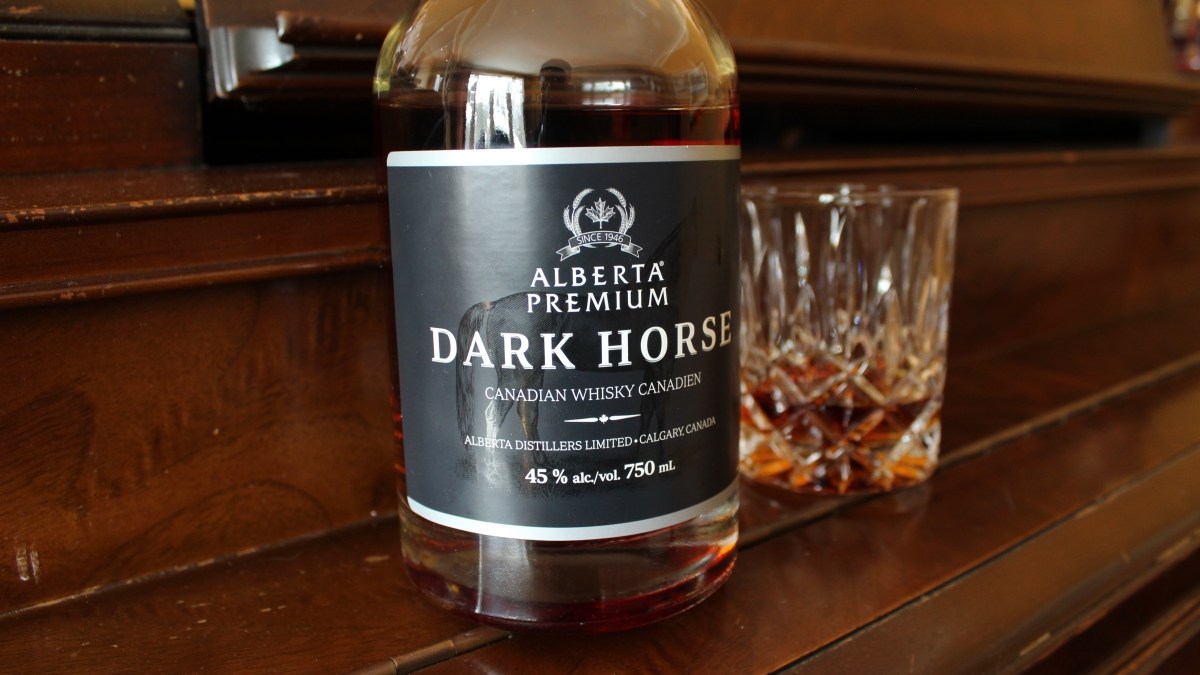 Those who stereotype Canadian whiskey as bland, characterless and best reserved for mixed drinks have obviously never tried Alberta Premium Dark Horse Whiskey. Brooding and dusky in the bottle, unadorned by the garish glass flourishes of its cheaper kin, Dark Horse certainly doesn’t look like your Dad’s go-to whiskey for his rye and gingers.

The standard Alberta Premium rye is unique in that it is one of the only 100% rye grain whiskey in Canada (and it also bears the distinction of being the whiskey  of choice for Papa Smith’s cream liqueur.) Cheap, cheerful, and flavourful, I expect Alberta Premium to make a fairly good mixed drink, with a bit more personality than other corn-heavy Canadian whiskeys. But Dark Horse is on a whole other strata. While not 100% rye like its little sibling, Dark Horse carries forward the bold flavours of the Alberta Premium high-rye tradition.

As I mentioned before, Dark Horse is a richly coloured drink. It’s deep, red-brown hue proudly shows of its time spent in charred-oak barrels (and possibly a healthy dose of caramel colouring.)In any effect, it certainly looks different than its Canadian kin. On the nose, Dark Horse lets you know its got a higher-than-40% ABV with a hit of fairly potent alcohol fumes. Once they subside, it smells incredibly spicy with notes of cayenne and black pepper, and a whiff of some sour cherries. Honestly, I wasn’t overly impressed with the smell, but that all changes once I tilted the glass.

What a whiskey. Dark Horse has a robust spice to it with a ton of depth. There’s sweet wood, dry smoke, a bourbony-vanilla, and rich dark fruit — and of course the rye spice. It’s peppery and rich, with a nutmeg character to it as well. I wouldn’t exactly call it “well-balanced” — this is a rock-band whiskey with a couple of wicked guitar solos instead of a symphony orchestra. But it works so well together that I’m not even concerned. Dark Horse has a heavy body, a long spicy finish and a kick-ass punch of alcohol. While I opted to take it neat, this is definitely a whiskey that wouldn’t suffer from a drop of water or an ice cube, if you are so inclined.

Canadian whiskey is where I really whet my teeth, and its nice to see some distillers investing a little in their creations. Dark Horse is a tremendous success for Alberta Premium, and a reminder of just what a Canadian rye whiskey can be — a drink worth sipping slow.

Alberta Premium is a legendary Canadian whiskey. Read more about its history here.