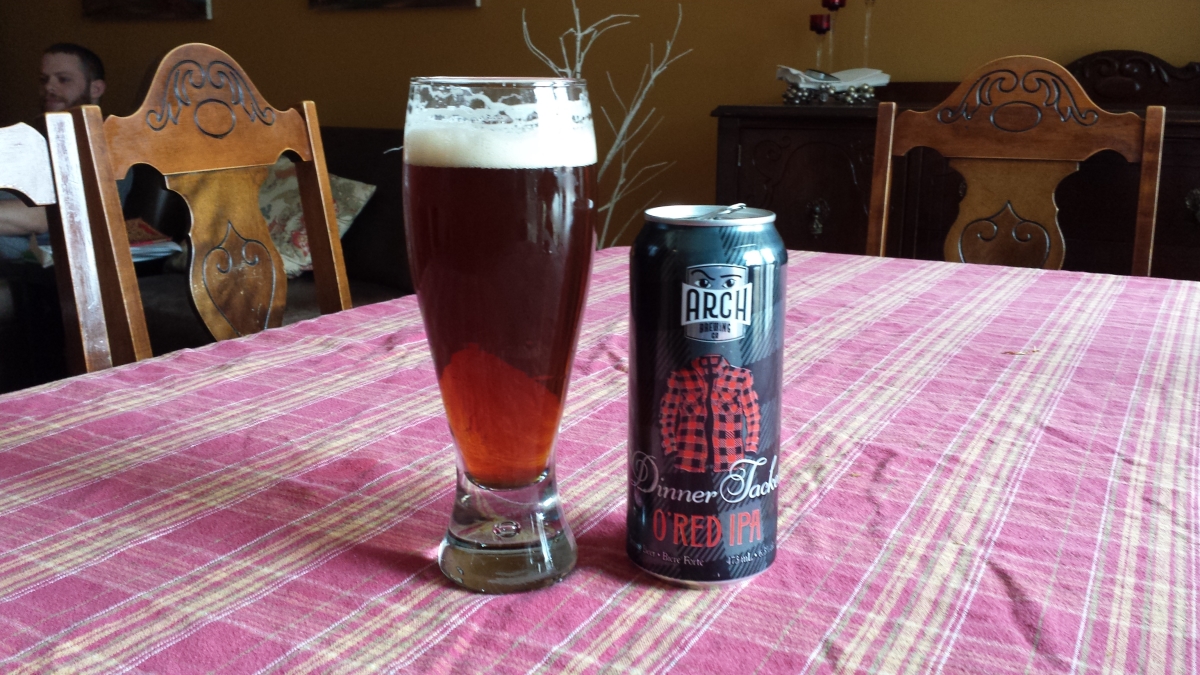 As an IPA fan, you tend to fall into a bit of a trance when tasting new ones. There’s hardly a dearth of choices, and there seems to be a new one every week. Each IPA that passes my lips has to try harder to impress me, as I’m no longer blasted by bitterness or seduced by citrus. When I tried Arch Brewing’s Dinner Jacket O’Red IPA, I snapped out of my trance – here was an IPA with something to prove.

What immediately separates Dinner Jacket is its colour – it’s about as red as they come (it would make a Rickard’s fan blush.) It’s also distinct in that it’s brewed with oatmeal, more commonly applied in stouts.  Additionally, while Arch Brewing is a distinct company, they’ve been brewing out of Wellington Brewery in Guelph, while they’re setting up their own location in Newmarket. It’s this kind of camaraderie that makes the craft beer industry so wonderful.

With its vibrant red colour, I came into Dinner Jacket expecting some rich malty notes, and perhaps a reduced bitterness from conventional IPAs. On the nose it had strong notes of pine, toast, grapefruit and floral notes. It certainly smelled like an IPA, but I wasn’t initially impressed – Dinner Jacket had arrived late to the IPA game, so what could it bring? That mentality quickly changed when I tasted it.

The texture. Oh the texture. Certain stouts aside, Dinner Jacket probably has the best texture of any beer I’ve ever tried. I suppose the credit goes to the oatmeal, but it left it with a thick, creamy, rich mouthfeel that was absolutely bliss-inducing to sip. The taste is an interesting blend of toastier malts with the fresh brightness of liberally applied hops. There’s no doubt that Dinner Jacket is an IPA, with very upfront pine notes, blood orange, and even some rye spice. It’s like eating a piece of toasted rye bread slathered in citrusy marmalade in the middle of a rain-damp forest – or at least that’s how their marketing team ought to describe it. It’s not particularly complex, but the flavours are accessible and enjoyable, and the texture is incomparably good.

With Arch Brewing Co. moving to Newmarket soon, I’m expecting to be drinking a lot more of it. It’s an excellent addition to the Canadian IPA canon, and with a texture that’s hard to beat, Dinner Jacket is definitely a beer you should be sipping slow.