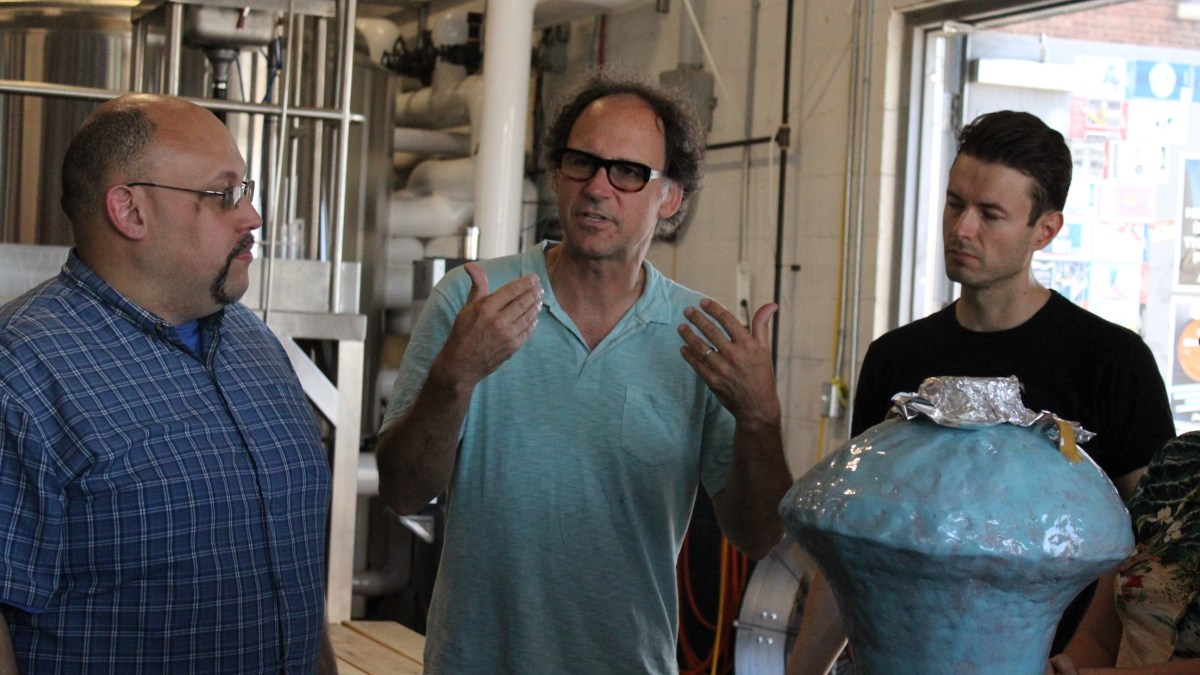 I’ve said it before and I’ll say it again — the best part of being a booze blogger are the random events you get invited to check out. Nowhere was this more true than when I got an invite to check out the “Maker Break: Henderson Brewing” collab they were doing with Gardiner Museum. In essence Gardiner Museum is exploring the utility of ancient pottery techniques with local artisans, and Henderson was supplying the craft beer for the kilned clay.

Well, “beer” might be a tad inaccurate. In fact, the fluid in question is an ancient fermented maize beverage called “Chicha” which was made by germinating maize (or masticating it in the brewers mouth) and letting it ferment in an earthenware vat for several days until it achieved the desirable flavour — or alcohol content.

After being approached by the Gardiner Museum, Henderson was eager to take part, but braced for a challenge.

“Most of us were familiar with Chicha before we got into it and were interested to see what our beer would taste like in a classic Chicha vessel,” says Steve Himel, Co-founder and General Manager at Henderson Brewing in an email. “The challenge is getting fermentation to take.  We are not controlling the temperature, it’s just in the room, and we don’t know how the ceramic will affect the yeast.  At this point these are all unanswered questions until we see what it tastes like.”

But then Himel added something at the bottom of his email — a glimpse into what you might expect of the Chicha.

“To be totally honest, I snuck a taste while writing this and it is amazing,” he added. “Part of the reason we used BEST as the wort was to be able to compare it to what we are used to.  It is very different… earthy and almost woody.  And I think it picked up some wild yeast along the way.  I’m really impressed and actually would consider maybe trying to incorporate this into something else.”

Whatever affect the ceramic vessel might have had on the fluid it contains, it was certainly striking to look at. The bulbous vat looked something like a child’s drawing turned 3D, with it’s lumpy, organic shape and tinfoil cap. Frankly, I was surprised anything consumable could be produced from it — but produced it can.

And it’s not the only thing ceramic can do, as the Gardiner Museum continues to explore.

“As a museum that champions ceramics, a medium that has been historically regarded as ‘craft’ rather than ‘art,’ we’re highly appreciative of the skill, creativity, and refinement that goes into practices typically regarded as such,” explains Celia Zhang, Marketing and Communications Coordinator for Gardiner Museum in an email. “Toronto is brimming with talented makers, artists, chefs, and brewers who are really propelling a new kind of craft culture movement forward — one that recognizes, celebrates, and legitimizes practices typically seen as ‘craft’ as art forms that require the same amount of refinement, skill, and creativity that we expect from fine art.”

As part of this drive to work with local artisans, Gardiner Museum was excited to work with Henderson Brewing, a leader in the craft community.

“We are really inspired by Henderson’s dedication to brewing beer in a way that honours traditional methods, but that also captures the creativity and innovation at the core of microbrewing. Their flagship beer, Henderson’s Best, is actually a modern take on a Toronto brew that dates back to the early 19th century!” Zhang says. “Their interest in carrying on the historical culture and traditions of brewing made them a perfect fit for Maker Break, a series that’s all about celebrating craft culture, both ancient and modern.”

The Maker Break Chicha tasting is happening on September 29th and tickets are limited, so make your move quickly if you want to check out Chicha!