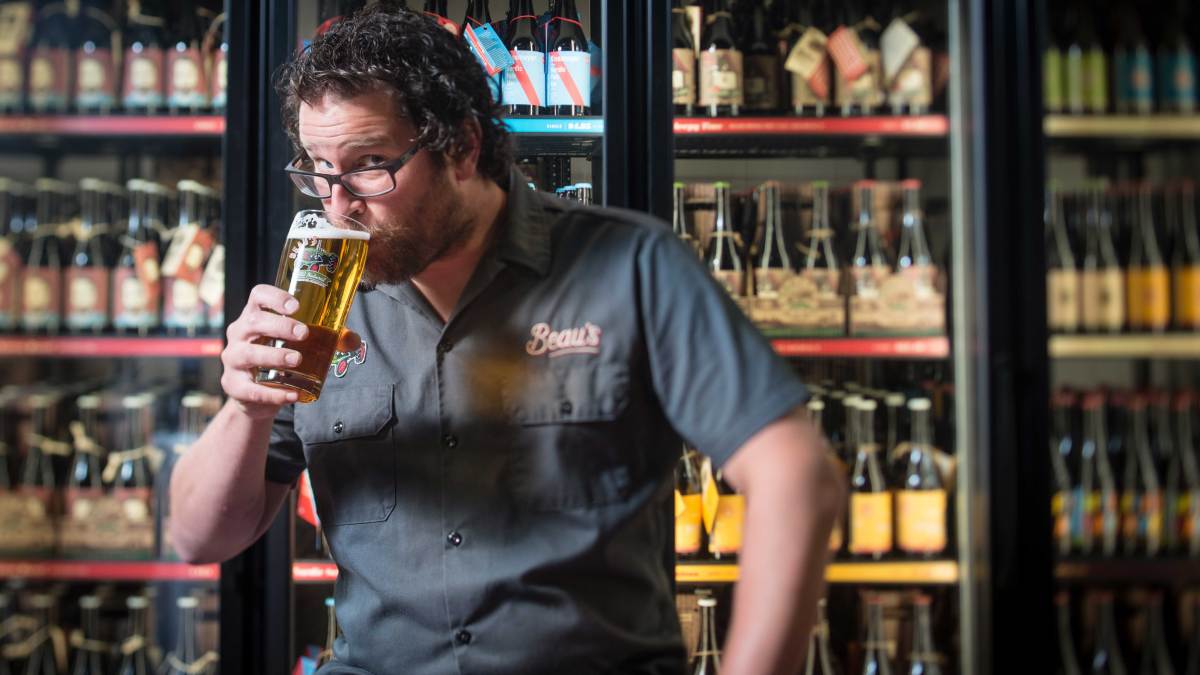 When I first ordered a B-Side Kissmeyer Nordic Pale Ale a couple of things became readily apparent: it was served in a Beau’s glass, and it was among the best pale ales I’ve ever tasted. With strong herbal and floral notes, fresh invigorating hops and even a touch of fruit, Kissmeyer commands attention. After quickly recieving clarification from my waitress regarding its origin, (“it’s a Beau’s” she assured me,) I decided to do my own digging. Apparently, it was in fact made by B-Side Brewing label, which was in some way affiliated with Beau’s All Natural Brewing Company. Regardless of how this convoluted relationship occurred, it produced one delicious beer.

After tracking down some Kissmeyer at the local liquor store, (which involved some desperate tweets at both Beau’s and the LCBO) I got my first look at its bottle. A simple red line crossed across its blue label, a far cry from the earth tones of most Beau’s products. In fact, the bottle bears absolutely no affiliation to its parent brewery. It does, however, bear the unmistakable spinning record of B-Side brewing on its cap. It was perplexing — what was B-Side Brewing, and how the hell was Beau’s involved? Without hesitation, I sent emails to both the Beau’s and B-Side inquiry accounts, hoping I might get some answers from a spokesperson. What I got, however, was an interview with Steve Beauchesne, co-founder and CEO of Beau’s.

Beauchesne founded Beau’s Brewey in 2006 with his father, and it has grown rapidly ever since. With its flagship beer Lug-tread Lagered Ale leading the charge, Beau’s has taken Ontario by storm. Now, according to Steve, Beau’s is booting up B-Side as its side project.

“Legally, it’s all the same company,” Beauchesne says of B-Side’s relationship with Beau’s. “The basic idea behind B-Side is to take the record label philosophy and apply it to beer.”

“We want to find breweries we’re big fans of [from around the world] and sign them to our label so we can distribute them to Ontario beer drinkers.”

Basically, B-Side exists to provide small breweries and independent brewers with an established venue and distribution network to share their beer in Ontario. Beauchesne likened it to an indie-music record label, providing a hub for musicians to establish their craft. Beau’s has earned enough of a reputation to encourage these brewing partnerships and bring new beers to Ontario. But it all started with Kissmeyer.

Beauchesne met Anders Kissmeyer, a Danish “gypsy brewer,” (as described in their marketing) on a boat in France while there on vacation. When they got talking about beer, sparks began to fly. The stage was set for an international collaboration.

“When lightning struck in my head for [B-Side] label, [Kissmeyer] was the first person I thought of,” Beauschesne says. “He was the perfect fit for this project.”

So far, B-Side has only collaborated with Kissmeyer, releasing beers in relatively low quantities — but future partnerships are already in the pipe. Beauchesne told me that the next B-Side project will be a joint-effort between Gigantic Brewing Company out of Portland Oregon, an ironically-named micro brewery that he assured me “makes absolutely phenomenal beer.” So far, the beer they are making is in the tinkering stages, but they are working on test batches of a Belgian IPA, set to be released in March — so you’ll have to stay tuned until then.

But what of competition? Surely an idea this good is going to generate similar “brewing labels” jousting with B-Side?

“I really hope so.” Beauchesne says. “It’s an innovative way to get around all the government regulations and red tape. ”

“This model has a lot of merit to it. It’s a great thing to do for your local beer drinkers.”

B-Side Brewing hit a home run with their Kissmeyer Nordic Pale Ale. But while the beer is good, the concept is better; it allows for greater exposure to small breweries from around the world who otherwise couldn’t afford to market themselves in Ontario. It’s great for them, but even greater for us — the beer drinkers who will benefit from these collaborations. If the results are as good as they’ve been with Kissmeyer, these are definitely going to be beers you’ll want to sip slow.