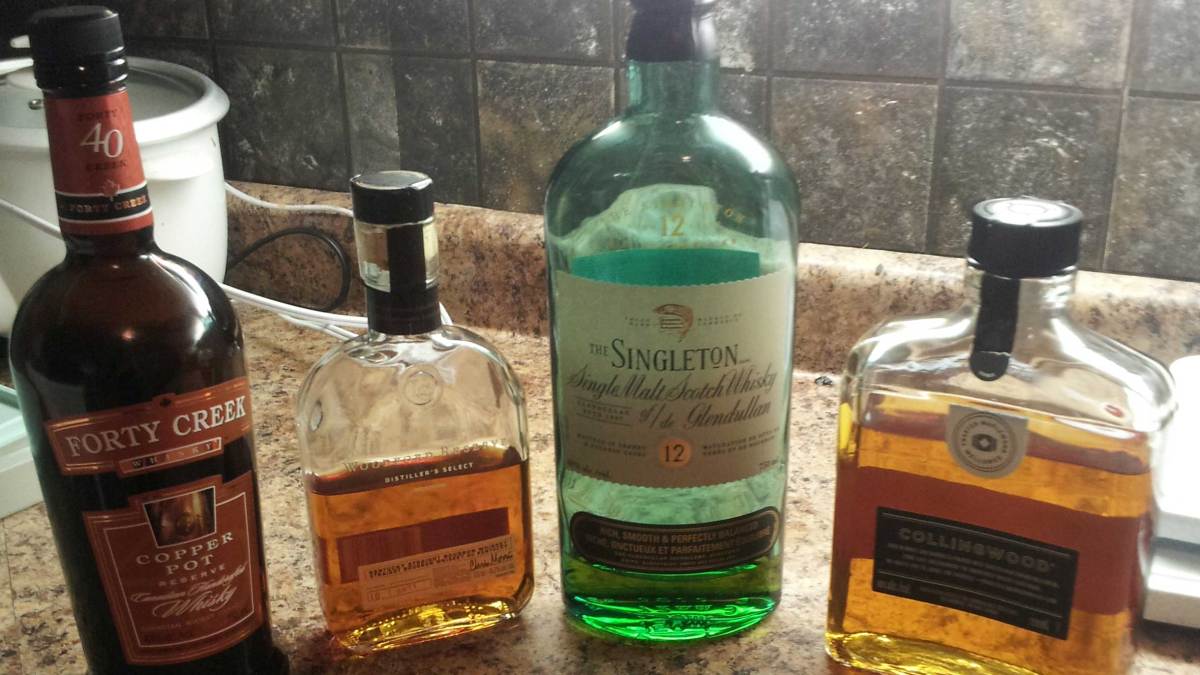 What happens when a group of friends find themselves with several bottles of whiskey and nothing to do on a Saturday night? Why, a blind whiskey tasting of course. Last year, by sheer coincidence, my close group of friends noticed we were each simultaneously in possession of a different bottle of whiskey, and wanted to find out how they compared. The culprits (pictured above),  were Forty Creek Copper Pot Rye, Woodford Reserve Bourbon, Singleton of Glendullan Scotch, and Collingwood Canadian Whiskey. Each promised a very different tasting experience, so it should be easy to identify them all in a blind tasting — right?

Well, sort of. As the above image bears witness to, we were well into the whiskey by the time this bright idea came upon us. Something any taster will warn you about is palate exhaustion, the side effect of the intensive tasting of any fine fluid. The result of palate exhaustion is a general muddling of your olfactory senses, making every flavour kind of blur together — like mixing a bunch of colours until the end result is inevitably brown. No problem for a casual tasting — no problem, that is, if you don’t have a reputation to uphold, which is unfortunately exactly what happens when you keep a blog on tasting alcohol.

The whiskeys were separated into unique opaque mugs by a non-drinking party who would act as adjudicator. Prior to beginning the tasting, we had picked our favourites, and we would now rank the whiskeys blindly in an attempt to remove bias and observe the difference. My favourites, in order from best to worst were Woodford, Singleton and Copper Pot with Collingwood falling a distant fourth. At first taste, these were all extremely unique whiskeys. Woodford was big and smoky, Singleton had scotch’s unique kick of iodine, Copper Pot had its rich cedar sweetness, and Collingwood a strange particle board-esque cheap wood finish. I quickly discovered however, that this became a lot harder with your eyes closed.

I pegged the scotch and the bourbon right away. Singleton stood out like a sore thumb from the rest, and I was familiar enough with Woodford to know it anywhere. But the last two really threw me off. With my mouth thick in different whiskey flavours, and my head a little light from the alcohol, I could not for the life of me tell the difference between Copper Pot and Collingwood. All eyes were upon me, I was taking the longest to make my final call. I had to make a snap decision, so I went with my gut — I was pretty sure I liked one better than the other, so I marked it as Copper Pot and held my breath for the unveiling.

The results were tallied. Every one of my fellow tasters had made at least one error — except for me. I was extremely relieved, and through the hearty congratulations I had to sheepishly admit that I got distinctly lucky. No matter to my friends, my reputation was preserved.

This experiment taught me something interesting. You’re never as good as you think you are until you do it blind. Had you asked me before this blind whiskey tasting if I could have identified each one, I probably would have bragged about how easy it would be. Now, I’ve stowed my ego and have recommitted myself to improving my palate. All told, it was a fantastic night of drinking, friends, and a Sublime Imbibing story I won’t soon forget.