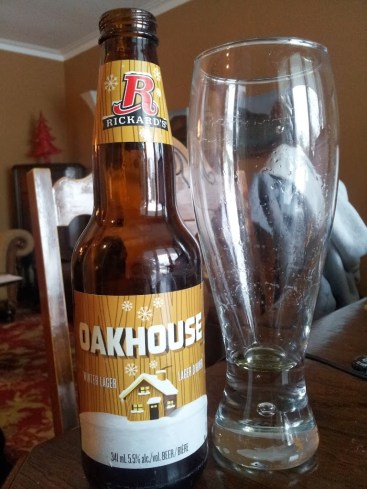 Craft beer is incredibly hip right now. Sales of it are biting into the profits of macro domestic giants like Molson-Coors and Budweiser, aggravating some execs. In response, the companies are looking into breaking out of the mould of mass-produced lager and into more interesting beer. On the surface, this can hardly be viewed with much negativity. Who wouldn’t want more diversity from the enormous beer pariahs (oh hey Budweiser). The only problem is, they haven’t quite figured out how to do it yet, and nowhere is this more apparent than in Rickard’s Oakhouse Winter Lager.

Rickard’s, an offshoot of Molson, has for years been making it’s middling red ale, popular among upper-middle class dads everywhere. But with the rise of craft, Rickard’s has greatly expanded its lineup to include a dark ale, a blonde ale, and several others. Recently, they released their Oakhouse Winter Lager, possibly their most unique beer. Unfortunately, it’s just not that good.

It pours a rich golden amber colour and foams with a dense head. Honestly, it looks quite drinkable. It smells quite a bit like bread dough, with a pleasant floral scent. So far, so good. But it’s the taste that’s a real flop. It’s extremely floral, with a sickly malty sweetness. There’s a bit of allspice and ginger as well, but the flavours seem to almost work against each other, rather than in harmony. It’s flabby, a bit too much, a beer you get half-way through and wish you never started. And worst of all, it’s hardly cheap, coming in at $2.35 per tall-can.

Simply put, if you’re in to beer that tastes similar to Rickard’s Oakhouse, there are better options. For about 50 cents more, spring for a can of Hop City’s Barking Squirrel Lager. It has a distinctly floral taste like Oakhouse, but the effective application of hoppy bitterness cuts the sickly inundation of sweetness that really ruins this Rickard’s. Best of all, while Oakhouse is only a seasonal beverage, you can buy Barking Squirrel all year round.

It’s not that I don’t appreciate the big beer companies attempting craft, I do. But they just haven’t nailed it yet, least of all Rickard’s Oakhouse Winter Lager. It’s not well-balanced or particularly enjoyable, and there are better beers in it’s style, for near-equivalent prices. In years to come, keep your eyes peeled for decent offering coming from the big guys. But for now, choose a different beer to sip slow.