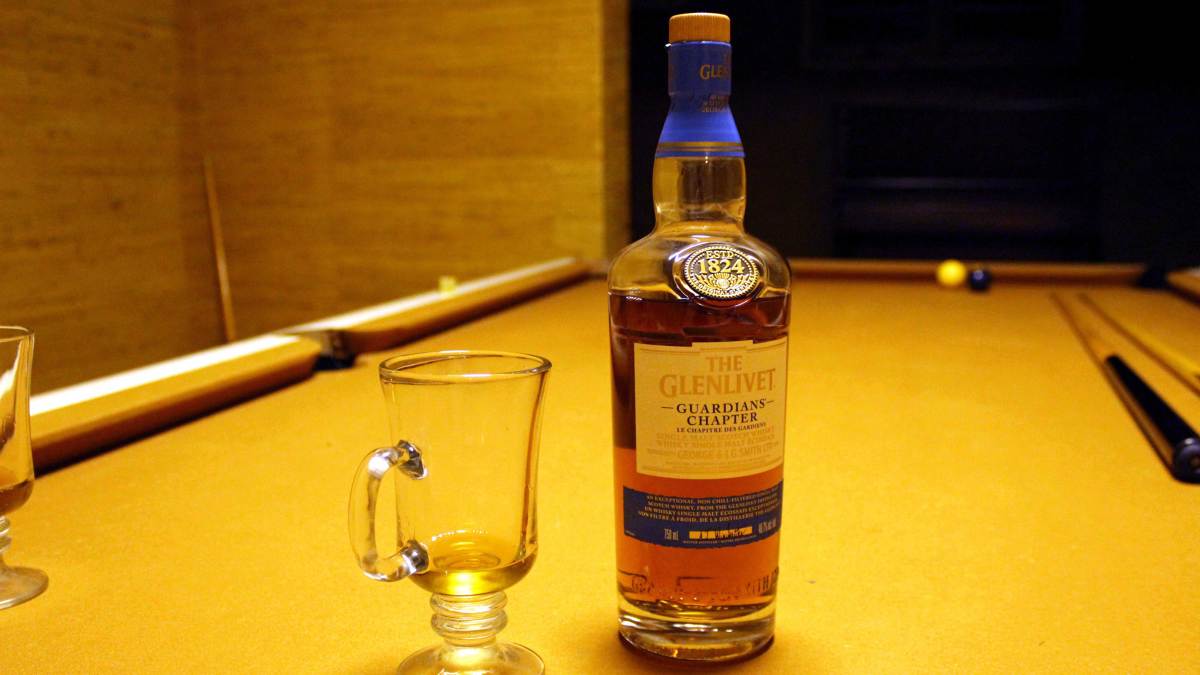 What happens when a distillery sends out scotch samples to its loyal followers and have them vote on the best one? A damn fine product, apparently. This is exactly what Glenlivet did with its Guardians’ Chapter Scotch in 2013, and the winner became a limited edition release named for the fans (or ‘Guardians’ as Glenlivet calls them.)

Matured in a variety of containers, including Spanish ex-sherry butts, the theme of Guardians’ Chapter is supposed to be “exotic.” In addition, it kicks up the alcohol content to 48.7% — not quite cask-strength but getting pretty close and definitely a throat-warmer.

In my current, rather austere lifestyle, I’m not exactly buying $90 bottles of single malt scotch left and right. However, my good friend recently celebrated his acceptance into Med School with a bottle of Guardians’ Chapter and I happened to be there at the right time when he decided to bust it out. We forewent fancy glasses, and since I was driving we weren’t exactly diving in headfirst. But I wasn’t going to miss a shot at this scarce Scotch.

Because I only had one dram, I can only give my first impressions on Guardians.’ Luckily, it made a significant enough impact for me to remember a fair deal about it. On the nose, the higher alcohol content makes its presence known in a burst of fumes. Once the initial assault cleared, it smelled of honey and sun-dried fruit, like something almost akin to raisin. My initial thoughts were concern about the alcohol overwhelming the taste on a Scotch this subtle, but I needn’t have worried.

Guardians’ Chapter goes down criminally easy. I mean criminally — what promised to pack a serious alcoholic kick on the nose softened into a warming ambrosia in the mouth. Big notes of tangerine and blood orange, cedar spice and even a hint of dark chocolate were all readily apparent. The finish was sweet but not cloying, softening into vanillas and honeys. I’m not exactly sure I would use the term “exotic,” but I would say “damn delicious.”

My friend definitely picked a fantastic way to celebrate getting into Med School, and I was pleased to celebrate it with him. Glenlivet’s Guardians’ Chapter Single Malt is a complex but harmonious beverage that delivers one of the easiest drinking scotches I’ve ever had — even at 48.7% alcohol. I only had one drink (driving as I was), but I would have loved another. Instead, I settled for sipping this fine limited-edition scotch extra slow.