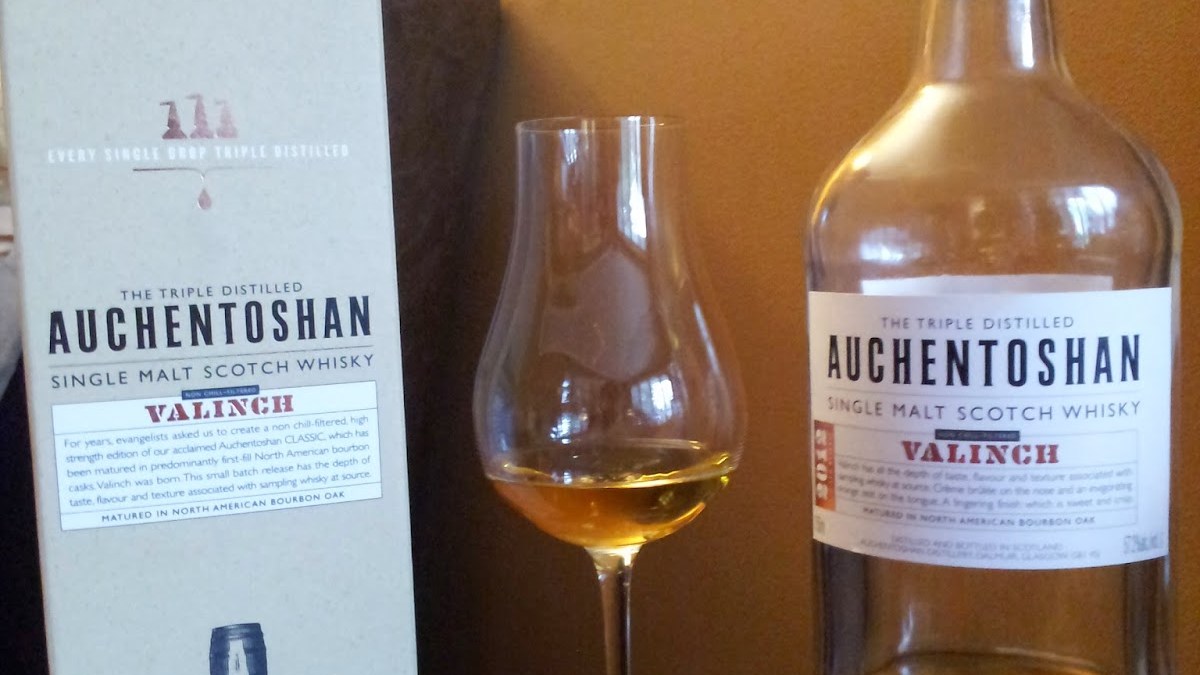 I never in my life thought I’d be describing a whisky with 57.2% alcohol as “easy drinking.” But if ever a scotch deserved to be associated with this cliched phrase, its Auchentoshan Valinch 2012 Single Malt Scotch. I had the pleasure of trying this whisky after my good friend and successor at The Gazette bought me a bottle to celebrate the transition. He obviously knew how to please me: How could I say no to a high strength, limited edition scotch?

For years, the distillers at Auchentoshan have been experimenting with their whisky. Consider them the craft-brewers of Scotland, pushing the limits of what can be done with scotch. Valinch is made in this spirit, and is part of their growing number of limited release whiskys.

Named for the glass pipette used to draw samples from barrels, Valinch is a cask strength scotch. This means it hasn’t been diluted to the standard 40% alcohol, which is common procedure for most whisky. While some claim the dilution brings out different flavours in a scotch, Valinch insists on remaining unadulterated; a risky maneuver, but one it pulls off successfully.

While most cask strength whiskys on the market are generally older, Valinch gives off every indication of being a young scotch. It’s colour is a light hay, very clear, and it leaves dense glycerin lines on the inside of the glass. On the nose, Valinch smells like nothing so much as caramel drizzle. The unmistakable scent of toasted sugar is so apparent it made me wonder if I was drinking a flavoured liqueur. Underneath the powerful sweetness was a spiciness that reminded me of fresh cinnamon. It was interesting, and despite the powerful alcohol fumes, I had no problems sniffing this scotch.

As for taste, Valinch made good for the promises it made on the nose. The Auchentoshan marketing people describe it as “creme brulee” and “creamy fruit” which I think may have been a tad ambitious. Certainly, the scorched sugar carries on the toungue, which I guess could be called creme brulee. And yes, there is a solid taste of orange which I suppose could be referred to as “creamy fruit.” For me, however, it tasted like nothing no much as the cinnamon I detected on the nose. It also ended with a pleasant pepper taste, which added a nice complexity to an otherwise fairly straight-forward scotch. And boy, it does pack a bit of a kick. My whole throat tingled with every sip, and after only one I was feeling rather warm and giddy.

Valinch was a great whisky and I’m grateful I got to taste it. It’s a potent beverage, but one concocted with a subtlety that makes it easily accessible and enjoyable. If you can still find a bottle of it, I recommend it to any scotch fan. If you can’t, keep your eyes open for other limited releases coming from Auchentoshan. They’re definitely whiskies you’re going to want sip slow.

What's a 'Wine'? Part II: The ABCs of Wine Terms