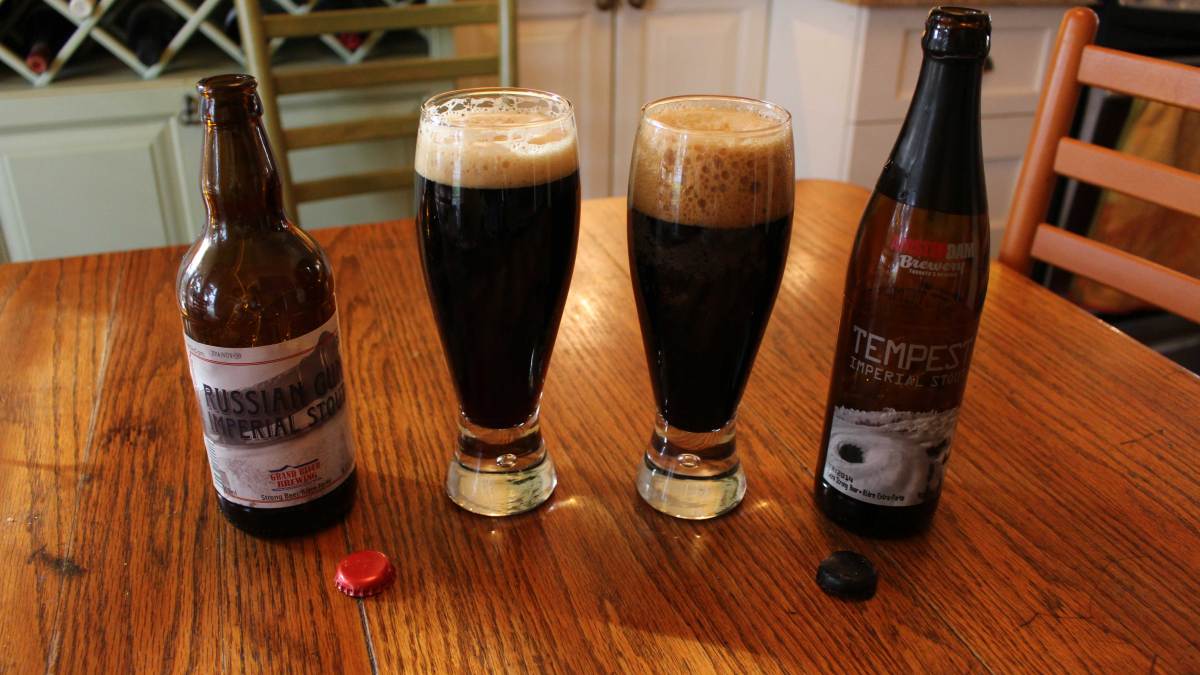 Winter means stout season — a season I have grown to love since I cultivated a taste for these fantastic black beers (which you can read about here). Nothing shoos away the winter chill better than a high-alcohol Imperial Stout, so I saw it as my duty to pit two of these toasty Canadians against each other to see which was worth stocking up on . The chosen stouts were Grand River Brewing’s Russian Gun Imperial Stout, an old favourite of mine, and Amsterdam Brewery’s Tempest Imperial Stout, a newcomer on the scene. So which was better? Read on to find out.

This was one of the first stouts I liked, so it holds a soft spot in my heart. Not to say it’s not good — in fact it’s quite excellent — but I had to acknowledge my bias going into it. It pours with a frothy beige head, and a rich black body. It’s a sexy stout. On the nose, there’s notes of coffee and dark chocolate, with a hint of fruit. It’s texture isn’t overly viscous for an imperial beer, and despite clocking in at 8.5% alcohol, it doesn’t impact the flavour much. And what great flavour it is — the coffee and chocolate come together in a nice mocha harmony, but it doesn’t go over board by cutting into it with a nice bitter, hopped flavour. My only problem is the finish, which is a tad flavourless and underwhelming. Otherwise, Russian Gun is an all-around solid stout that I will continue drinking.

This is an absolute grandslam for Amsterdam. This is simply one of the best imperial stouts I’ve ever had, excelling in every measurable aspect. It pours with a rich, loose, brown head that lingers for eons. It smells shockingly fruity, with the typical mocha kick. Texturally, this beer is almost untouchable. It feels like black satin, with superb carbonation augmenting the fantastic taste of dried cherries, high cocoa chocolate and even a hint of black licorice and smoky barbecue. Despite possessing a towering 9% alcohol, Tempest goes down easier than a milkshake.  It’s such a complex and well balanced beer that I’m fairly certain a hundred tasters could experience a thousand different notes. One thing they could all agree on, however, is that this beer is damn near perfect.

There’s no doubt about it, these are two great imperial stouts. I love comparing alcohols of such comparably fantastic quality, because it’s a pleasure to drink both. However, a winner has to be declared and it undeniably goes to Amsterdam for Tempest. While there is nothing wring with Russian Gun, it seems to have gotten comfortable in its style, where Tempest innovates and pushes boundaries. It is a fantastic beer for any season, but this winter, you’re definitely going to want to sip Tempest Imperial Stout slow.