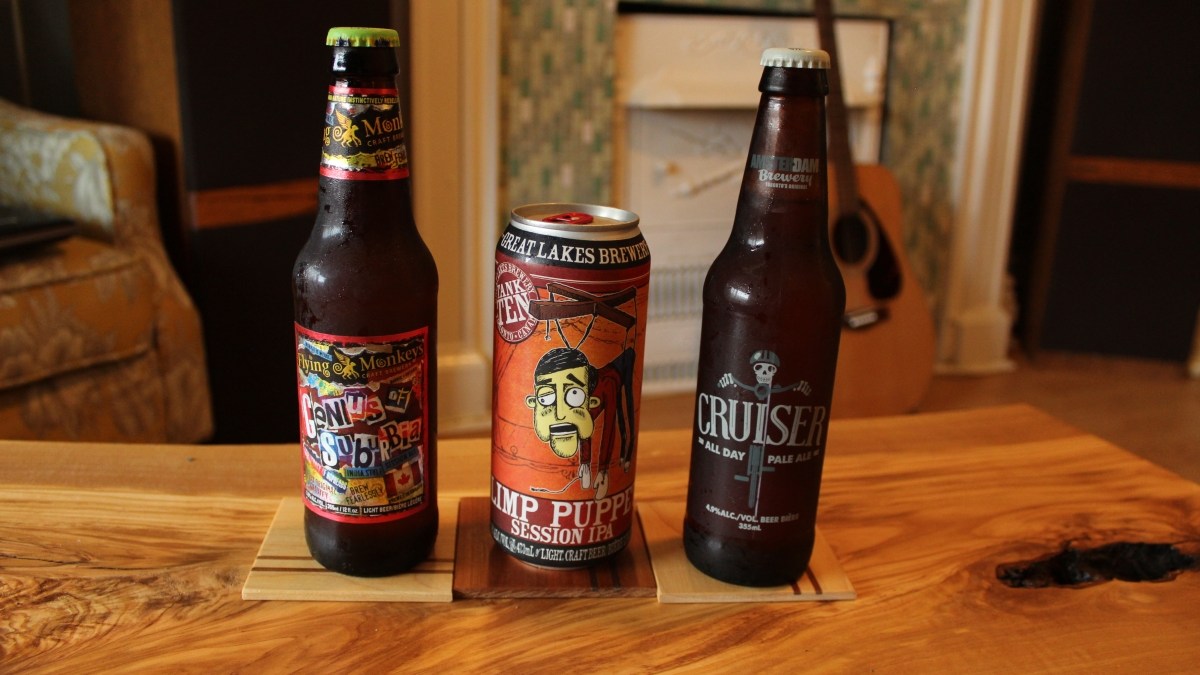 Like a bolt of low-ABV lightning, session pale ales have struck the hearts and minds brewers and drinkers alike. Perhaps in response to towering alcohol percentages and crippling bitterness, a wave of highly drinkable session pale ales have become available for public consumption. Among these, some of my favourites have been from Southern Ontario, including Flying Monkeys’ Genius of Suburbia, Great Lakes’ Limp Puppet and Amsterdam’s Cruiser. Make no mistake, all of these are quite good — but which is the best? I put them head to head to find out.

Disclaimer: this one kicks ass on draft, and I was a little let down by the bottle. The Genius is by far the most bitter of the three tasted, coming in at 52 IBU. It has a lovely lemony aroma, with an undertone of hay. The head was sticky, leaving a solid lace on the glass. In spite of the relatively high IBU, Genius was quite well balanced with a sweet maltiness that kept it highly sessionable. It carried on its lemony citrus character, and even had some of the pine character I adore in its big brother Smashbomb. At 3.8% alcohol, Genius is a gentle lover, and it’s highly feasible to drink several in quick succession. Overall, very drinkable, but lacking a certain oomph. It might be best served converting a lager-lover to an IPA imbiber.

Frankly, I thought Cruiser was going to win when I started this tasting. I have a long history of loving it as my go-to session beer, and its wonderful balance and flavour are hard to beat. Cruiser is the most muscular of these session pale ales, at 4.9% alcohol. It pours cloudy and golden with a wispy head, and smells wonderfully of grapefruit. I’ve always been a sucker for flavourful pale ales, and Cruiser doesn’t disappoint. It’s got a spice character to it that reminds me a bit of spruce, with a mild vegetative note accompanying the rather subdued maltiness. Without a doubt, the hops are front and center in this brew, and it packs a grapefruit-driven bitterness that may be a bit much for those looking to drink it all day. Either way, Cruiser is quite complex for a session pale ale, and will aptly serve its purpose of being your Friday night six-pack.

It’s fairly rare that I disagree vehemently with reviews from Your Next Beer, but this is one of those times. Where they described it as “lackluster” I found it quite the opposite. In fact, Limp Puppet may tick all the boxes for me in what I want from a session pale ale. On the nose, it has a lush, sweet fruitiness that reminds me of orange marmalade. Close your eyes, and you can almost imagine sniffing a good radler. The taste is even better, with a rich grapefruit character minus the grapefruit bitterness. Limp Puppet  kicks it up with a bright ginger note and finishes with a lovely breadiness. All this is augmented by the lush carbonation and fantastic texture that Limp Puppet bears. With an alcohol percentage of 3.8%, you could probably drink about a thousand of them (although I’m not a scientist.) I enjoyed this drink all the way through, and it stood out to me as a clear favourite in this ‘Head-to-Head.’

You can’t go wrong with any of these three beers. They’re all eminently drinkable. But for a blend of complexity, balance and sheer refreshment, I think you should opt for Great Lakes Brewery’s Limp Puppet. It’s definitely a session pale ale you’re going to enjoy sipping slow.