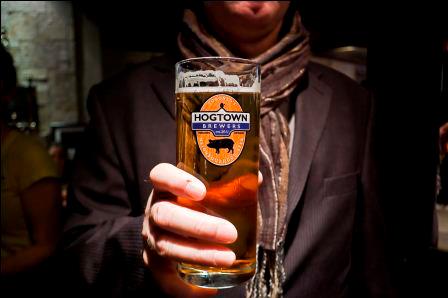 Cheers, from Hogtown. Photo courtesy of Hogtown Brewers.
Beer, Behind the Beer

If you’re into the craft beer community, you probably have mixed feelings about contract brewers. Sure, they represent the entrepreneurial spirit that defines independent beer producers, but in a thriving market some question the veracity of their intentions — is it passion for the beer, or merely a business trying to get a piece of the pie?

Enter Hogtown Brewers, a contract brewery named for and sold in Toronto, despite being contracted out of Brick Brewery in Kitchener. Their Kölsch-style ale has become nearly ubiquitous in Toronto pubs, a staple for craft beer drinkers stuck with a menu offering Rickard’s Red as a premium selection.

While hardly brewing the most interesting beer in the Toronto scene, Hogtown CEO (and self-described ‘Chief Keg-Washer’) Noel Chambers is happy to fill an important niche for drinkers.

“My partner was insistent that we start with a ‘drinkable’ beer. I was more interested in brewing something much more aggressive,” he explained over an email. “If I did not listen to Pete we would be gone. Our footprint is almost exclusively in downtown bars where ‘aggressive beers’ do not do very well.”

“We are a cheap and cheerful ‘gateway beer’ where Alexander Keith’s drinkers know they should probably support some local offerings. They try us and 10 to 20 percent don’t mind it. I wouldn’t say in any way that we […] are trend-setters, we just want to add to the growing craft movement.”

Like most people who enter the brewing business, Chambers started Hogtown after catching the craft beer bug himself.

“I developed a deep appreciation for craft beer. I loved all new offerings that any Ontario brewery was making,” he explains. “I wanted to see more of the offerings from small Ontario craft brewers in Toronto bars.”

After simply trying to “rep” different craft beers in Toronto bars, Chambers decided to go a different route, and hired Jay Cooke to come up with their flagship Kölsch recipe.

Once adequate funding was raised and the beer was brewed, Chambers and partner Peter Shippen began trying to get Hogtown into as many pubs as possible.

After some initial success, Hogtown launched in the LCBO, offering their Kölsch in a 473ml can. In spite of their growth, Chambers is content for the time being to remain a contract brewery out of Brick Brewing Co.

But what about the naysayers, critical of contract brewers place in the craft beer scene?

“Let’s be clear, the stuff that the best guys (Left Field, Great Lakes, Black Oak etc.) are doing is much more important than what we have contributed to the Ontario craft scene,” Chambers says. “As a contract brewer it is very difficult for us to be on the cutting edge of anything.”

Cutting edge or not, there is no doubt the passion behind the beer is real. Hogtown has deftly carved a niche for itself, and proudly represents an accessible entry into the world of better beer.

“I don’t know that I am qualified to give advice to brewers. But to young people in general, do what you love,” Chambers says, adding, “Don’t quit your day job. Work a forty hour week and spend your evenings and weekends expanding your ‘love project’.”

So is there room for contract brewers in Ontario? Or are they simply cluttering the already stocked shelves?

A similar question could easily be posed about books. It’s ridiculous to get rid of all the Harry Potters simply to stock more copies of War and Peace.

Harry Potter is the gateway for many readers who will one day undertake a Tolstoy. But without the warm welcome to reading, they may never get the chance. Hogtown and other contract brewers can occupy the same space in Toronto’s burgeoning craft beer scene.

“I just want to tell your readers how much fun I have had with Hogtown. The people in this business are fantastic. I have dozens of stories of people in the craft beer business being so kind and helpful to me and my employees,” Chambers says.

“Some will say that we are reaching a saturation point for new craft breweries in Ontario. I completely disagree. We are just at the starting point.”

smoth, 6 years ago 2 min read
Beer, Behind the Beer