Travelling to Japan exposed me to a wonderful world of refreshing cultural differences. From the food, language and customs to the possibility of adequate public transit (take note, TTC). But there were plenty that seemed familiar too, and that included the Japanese love of drinking, notably beer.

And boy, do the Japanese love their beer. Billboards and advertisements are absolutely everywhere, with conventionally handsome Japanese men staring in wonder at their frothing pint. Every restaurant and convenience store is stocked with the big Japanese brands, and a cheeky lunch beer seems to be the standard for business-suit-clad workers.

But there’s another side of Japanese beer culture. When it isn’t enjoying a can of lager on the Subway or a lunch beer, some drinkers go absolutely overboard as evidenced by the multitude of semi-conscious fellows we’d see on the way back from a night out while in Tokyo.

Without further ado, here’s some of the interesting things I observed about Japanese beer culture:

Be it the local 7/11, a Ramen shop or even a vending machine, you’re probably arms reach from a cheeky pint. It was enormously refreshing (both literally and figuratively) to have such inexpensive, unfettered access to a cold brew.

Matter of fact, the Japanese seem to have a very liberal idea about where or when a beer could be enjoyed. I saw people cracking into a can at 11am and no one batted an eye. Or a guy who casually reached into his grocery bag and brought out an Asahi to drink on the train. Hell, after seeing six or seven people partake, me and my trusty old intern even grabbed a road beer or three.

All in all beer seems to be treated more like a soft drink in Japan than it is in North America.

It seems like there was an arms race over how intense you can make a beer ad in Japan. Couple things of note — they almost exclusively feature men (mature, handsome men at that) and they’re all gazing in absolute wonder at a frothy pint (see the featured image).

If it’s not a handsome dude gaping in awe at a pint, it’s neon lit and huge. In Canada, you’ll get the occasional beer billboard, but it’s nothing like the icons to the beer gods the Japanese erect.

It really seems like beer is marketed as a dominantly male beverage — a trend that persists in North America, but is just beginning to mercifully wane. 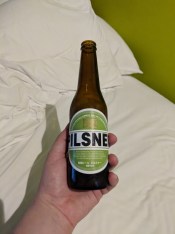 While the Japanese have a dominant preference for macro-brewed lagers from likes of Kirin and Asahi (I saw surprisingly little Sapporo, believe it or not), I did encounter a few Japanese craft beers along the way.

Notably, A.J.I. beer has a lineup of ales including a very good Pale Ale and IPA, as well as a stellar Pilsner pictured left. It was truly a taste of home to have a more interesting beer after dozens of lagers.

There’s still a long way to go, but the love of beer is well in place. If grass roots marketing can work amidst the clutter of neon macro-lager ads, I think Japan is ripe for a craft revolution of it’s own.

I thoroughly enjoyed drinking my way across Japan (although it might be several months before I reach for a lager again). The accessibility and acceptability of drinking a beer on the go was great, and I know one or two beer nerds back home who would enjoy the freedom.

It was also great to see the signs of craft beer creeping up. I fully expect by the time I return to the Land of the Rising Sun, interesting ales will be as available as sushi. And I will definitely enjoy sipping it slow.

smoth, 5 years ago 1 min read
Beer, Behind the Beer