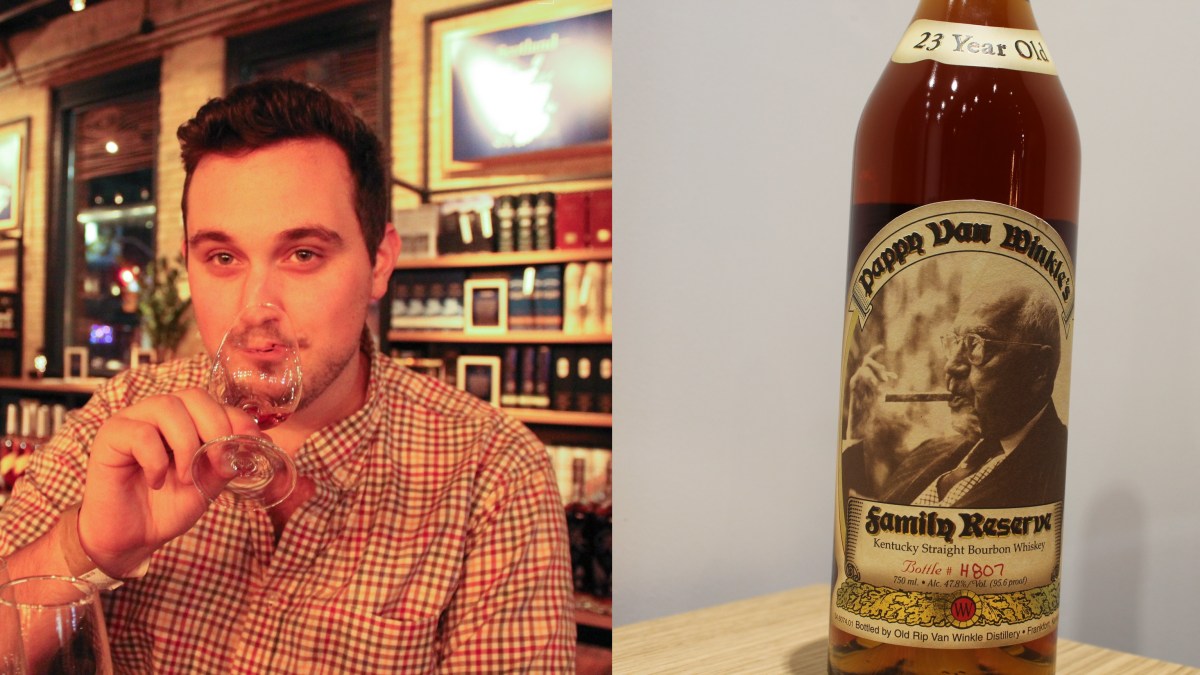 I’ve written about Pappy Van Winkle 23 before. Not about tasting it of course — I mean, realistically I never thought I’d get a chance to. The hype surrounding this [in]famous bourbon is such that mere mortals with laughably puny bank balances are rarely afforded so much as a taste.

But sometimes you just get damn lucky.

I entered the #LCBOTastesPappy contest with a silly selfie (which you can see below), never in a million years dreaming I’d be randomly selected to try The Unicorn. The selfie was taken at the fantastic LCBO popup shop on King Street, and after a reasonably priced flight of bourbon, it seemed like a good idea. As it turned out it was a very good idea. I actually won, by complete chance.

The stupid selfie that won me a chance to taste Pappy Van Winkle. #lcbotastespappy

I’ll spare you the details behind Pappy Van Winkle 23. If you’d like to learn more about the hype, check out the blog I wrote for Chicago Bourbon Blog. Suffice to say, due in large part to success in blind tastings and endorsements by celebrities like Anthony Bourdain, Pappy’s popularity exploded — and so did its price. While it retails for a fairly modest price (merely in the hundreds), the resale value of a bottle of Pappy can run past $3,000.

This hype has caused a rift among bourbon drinkers. I mean, surely no bottle of fluid on earth is worth three grand right? Right?

Let’s cut to the chase. If I woke up tomorrow and there was a bottle of Pappy in my local liquor store AND I had $3,000 lying around, would I run out and buy it? The answer is a resounding and heartfelt “No.”

But I did give it a perfect score. In fact, it’s my first perfect score for any bourbon. And the reason is because it is practically perfect. It’s overwhelmingly good, and I’m saying this as a man who approached the tasting fully prepared to scoff at the overblown hype.

Matter of fact, I actually braced myself for a colossal let down. We were given two whiskies to try before Pappy, presumably to set a bench mark for the main event. The first is the very solid Buffalo Trace — a damn fine dram in its own right. But the second was Blanton’s Original Single Barrel, one of my personal favourites, and one I believed would be comparable to Pappy in terms of refinement. Pappy is a wheated bourbon, meaning it would likely lean towards subtlety, something Blanton’s excels at.

In other words, I kinda feared they’d set the bar too high — was Pappy Van Winkle 23 really going to be that much better than Blanton’s?

After a short Q&A with a distiller at Sazerac, we were brought our 1/2oz of Pappy. It sat dark orange-brown in the glass, and looked heavy and thick, sticking to the sides of the glass as you swirled it.

On the nose, no other note was as obvious to me as brown sugar. Or perhaps, lightly toasted brown sugar leaning towards caramel. There was a hint of something bright and spicy — my mind leapt to ginger, but as far as I know that’s a laughable tasting note for Pappy so take it with a grain of salt. It was extremely rich and sweet, with very minimal alcohol fumes. It seemed you could practically stick your whole nose in the glass without the traditional burn.

The mouthfeel of Pappy Van Winkle 23 is just sublime. It’s thick and rich, and feels like you could practically chew it a little. The caramel on the nose takes centre stage, with an undercurrent of molasses and vanilla. The decades spent in oak are evident, giving Pappy a distinct sweet woodiness. All in all, the flavours were subtle and incredibly well balanced. So well balanced, in fact,  I had difficulty picking out individual notes beyond the aforementioned.

One thing that came to mind as I enjoyed this lovely whiskey was just how accessible it is. It’s laughable really — Pappy is impossible to find, impossible to afford, but might be the most obviously enjoyable whiskey I’ve ever tried. If you happen to be a millionaire, and you’d like to introduce someone to a good bourbon, you’d be hard pressed to do better than Pappy Van Winkle 23.

Pappy Van Winkle 23 is probably the most delicious whiskey I've ever tried. I'm almost embarrassed admitting that -- I feel as if I've betrayed the true snobs who look down at Pappy fans. But I can't deny how damn good it tasted. And, given I won it for free, I didn't have to worry about the post-purchase regret one might feel dropping thousands on a single bottle of bourbon. I can't in good consciousness recommend you go out and order an aftermarket bottle for thousands of dollars. But if you ever get a chance to try The Unicorn, you're in for a treat. It's without a doubt one whiskey you're definitely going to want to sip extra slow.