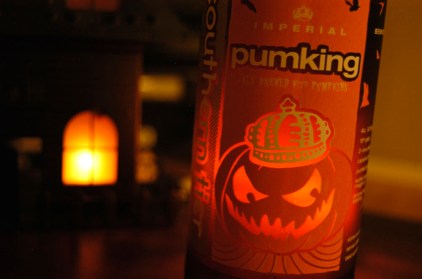 My intention when I began writing this post was to review several seasonal pumpkin brews, and pick my favourite. But when I re-tasted Southern Tier’s Pumking I forewent even reviewing other options. Because, simply put, Pumking is the best pumpkin beer on the market, and frankly, one of the best beers I’ve ever tried.
Think about the pumpkin beers you’ve had. Actually, think about any of the pumpkin products you’ve tried this season. From lattes to cream cheeses, and muffins to soup, pumpkin is the hot fall flavour. This of course extends to beer, and while many of these seasonal products are quite tasty, pumpkin is rarely the most distinct flavour. Generally, it’s “pumpkin spice;” a hint of nutmeg, a splash of cinnamon and, maybe if you’re lucky, the faintest whiff of pumpkin. Beers are no different, and by plastering the iconic orange gourd on the label, breweries can all but guarantee a fall fan base. But for Southern Tier, this wasn’t quite enough for their Pumking.

Just by pouring it you can tell this is a special beer. Its rich, amber colour is topped with a opulent head, a product of the soft, dense carbonation. Its smell is fairly subtle, but I’d recommend bracing yourself for the inundation of flavour you’re about to experience.

It’s bloody pumpkin pie in a glass. I’m not exaggerating, I mean it; with its heavy, silky texture, sweet vanilla flavour, wallop of pumpkin, all amalgamated with some cinnamon and other spices, Pumking is a bite of pie, and the ice cream on the side to boot. My girlfriend, who recently tried it, was astounded. As an infrequent beer drinker, she had never tasted anything quite like it. Where other pumpkin beers tend to be a little less fastidious with the actual “beer” part, just pushing the pumpkin gimmick instead, Pumking has simply one of the best tastes and textures I’ve ever sipped.
One more thing to note: While this beer tastes like dessert, I wouldn’t recommend digging in too deep. At 8.6% alcohol, Pumking can really sneak up on you. One minute, you’re carving a Jack-O-Lantern sipping a Pumking, the next you’re in the hospital with a serious carving-related laceration. Note to self, one Pumking is often enough. Helping you to keep some self control is the hefty $9 price tag for a 650ml bottle, which really just serves to denote its quality, separating it from the more pedestrian pumpkin beers.
Do yourself a favour and try this beer. I don’t even care if you like pumpkin (or beer for that matter) I’m fairly confident this beverage is good enough to change your opinion on both. Southern Tier has gone above and beyond to create a seasonal beverage that can hold its own no matter what time of year it is. Pumking is the best pumpkin beer I’ve ever had. And because it’s only released once a year, buy a bunch, but make sure to sip them extra slow.