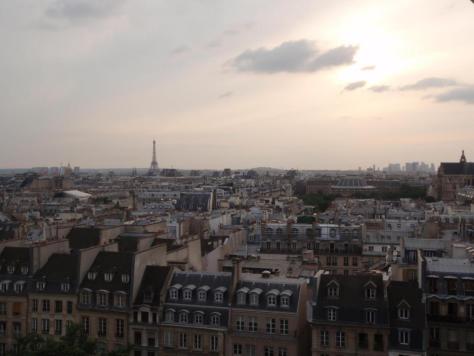 My family visited Paris in May 2009. Undoubtedly we were the quintessential tourists, visiting every church, monument and gallery we reasonably could in a week. For our last evening in France, we decided to take advantage of our setting and sample some snazzy French cuisine. Sitting atop the Georges Pompidue Centre modern art-gallery in the heart of old Paris is the chichi restaurant Georges. This served our purposes perfectly, so we ditched our comfy tourist clothes in favour of some appropriately collared apparel and booked a reservation.

After ascending to the top floor of the museum, we were greeted by the astoundingly beautiful view of Paris depicted in the above picture. We walked into Georges, and were greeted by odd sculptures and paintings, befitting its location on top of the gallery. We were seated next to a window, and provided with an ample menu of wines and liquors. It was exceptionally warm for May, so my mom and sister opted for a couple of icy cocktails. Recognizing that this was our last night in Paris, my dad and I knew we had one last chance to actually have French wine in France and went for a bottle of red. But what to get?

Smith is an exceedingly common last name. I have even been jokingly accused of adopting an alias. However, Smith is exceedingly uncommon for a French last name, let alone the name of a Bordeaux chateau. So when my Dad spotted a bottle of 2005 Chateau Smith Haut Lafitte on the menu, we knew at once we must have it. It wasn’t cheap; in fact it was about 70 euros. But hell, we thought, we’re in France! So my dad grinned and we ordered a bottle.

The waiter brought our bottle, and the cocktails for the women. Bearing a yellowish label and blue fleur-de-lis, nothing could look more French than the Smith Haut. A taster was poured for my dad, and he slid it over to me so I could try it first. As i dipped my nose into the glass I was blown away. I was incredibly underexposed to the complexities of wine at this point, but despite my ignorance, I absolutely knew this wine was something special. After a taste, I nodded at the waiter and he poured us each a glass.

After one sip, my Dad stopped talking. We looked at each other in silence. The message was clear; don’t speak up or we’d have to share. This wine was so damn good we wanted every drop. My mom and sister sat beside us tittering about their drinks. Let the women keep their cocktails, we were going to do in this red.

Yet, my mother, ever perceptive, noticed our unusual hush. “How’s the wine?” she asked my Dad. “It’s ok, pretty subtle, I don’t think you’d like it much” he replied feebly, ever the poor liar. “Let me try some” my mom ordered. Defeated, he slid his broad glass over to her. She took one sip and her eyes widened. “Order another bottle Dave.” With a sigh, resigned to spending another 70 euros, my Dad gestured for the waiter and another bottle was sent for.

I didn’t give it a proper tasting; hell, even if I did, my ignorance likely would have prevented me from doing it justice. But this is without doubt the single most pleasure I’ve ever derived from a glass of wine. 2005 was a notoriously good year for Bordeaux’s, and Smith Haut Lafitte is a notoriously good Bordeaux. I have never tried it since (rarely having $100 to drop on a bottle of wine), but one day I have promised myself I’ll get another bottle, sit down with my old-man and relive one of the most sublime sips I’ve ever taken.