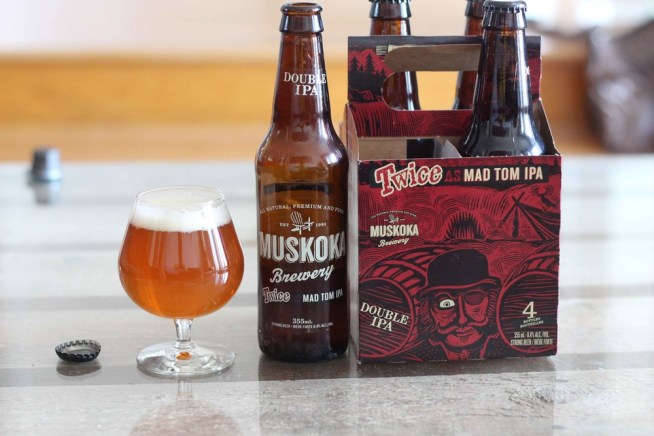 I’m a hop head. A fiend for IPA’s, the more bitter the better. I’ve extolled their virtue in several posts (such as this one), and one of my all time favourites is Muskoka Brewery’s Mad Tom IPA. So when I got to try Twice as Mad Tom Double IPA, my expectations were higher than its towering 71 IBU (International Bitterness Units). And I was still blown away.

If the regular Mad Tom is Roger Moore as James Bond, than Twice as Mad is Daniel Craig. Both play a similar role, but where Mad Tom is perhaps a bit gratuitous, a tad over the top, Twice as Mad is a more mature, reserved IPA. Despite having 71 IBU compared to Mad Tom’s 62, the bitterness comes across with less lip-puckering, palate searing intensity than its little brother. A more complex, richer flavour accompanies it, and that’s only one of the many improvements.

The aroma for Twice as Mad is fairly subtle for such a big brew, with quintessential IPA notes of citrus fruit, grass and fresh bread. While very pleasant, its subtly doesn’t reveal the full potency of the beer. It pours a beautiful deep amber, with a thin white head. The very look of it connotes quality, and I get excited every time I drink it.

But on to the good stuff. Texturally, Twice as Mad Tom is flawless. Enough weight on the tongue to remind you you’re not sipping a sissy beer, and a dash of bracing hoppiness and acidity to refreshen the senses like a dip into a glacial spring. Even with cliched analogies I struggle to convey just how pleasant it is to have this beer in your mouth. The taste is well-balanced, and tastes of grapefruit, sourdough bread, and has a nice sweet maltiness to the finish. A word to the wise: don’t delve too heavily into this fantastic drink. At over 8% alcohol, Twice as Mad can leave you twice as hungover.

It’s big, it’s beautiful, and it’s perfect for some serious summer drinking. A great Canadian beer which far exceeds the already fantastic reputation of the regular Mad Tom. Pour yourself a glass, brace your buds, and enjoy Muskoka’s Twice as Mad Tom DIPA. You’ll definitely want to sip this one slow.