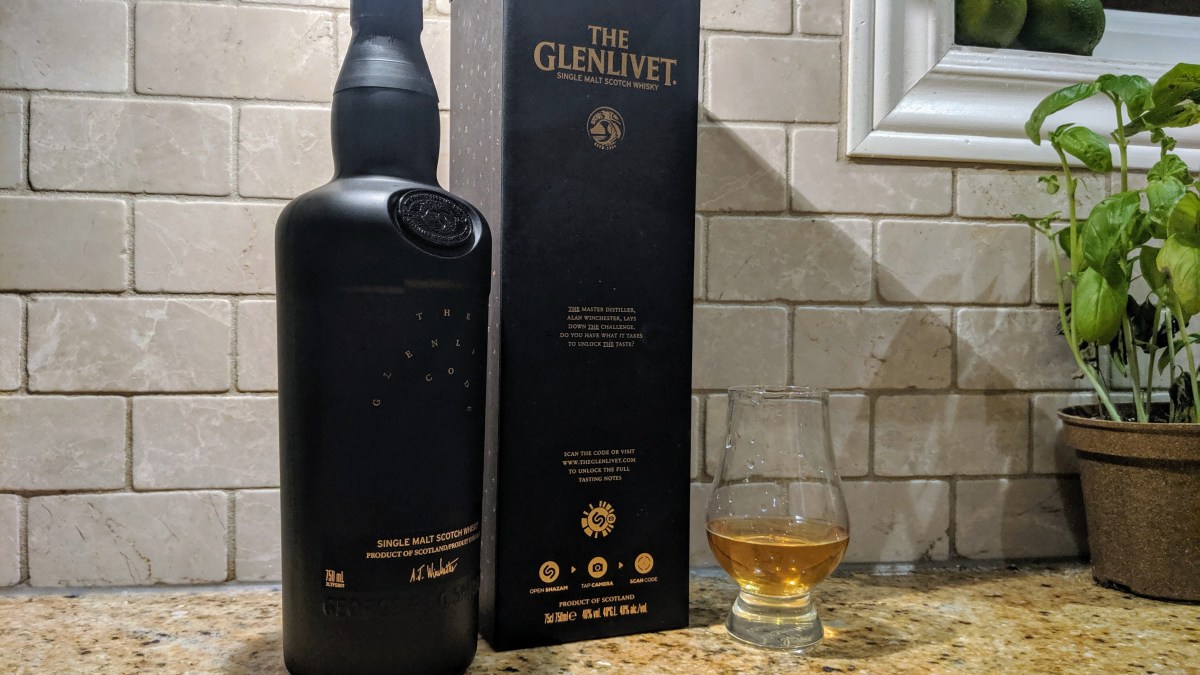 Having a scotch-drinking mom and a scotch-drinking aunt certainly has its perks. One of those is when a new, cool bottle hits the market, we can split the cost three ways instead of each nuking our wallets for a chance to try it. And few bottles possessed the mysterious appeal of The Glenlivet Code, a scotch whose entire gimmick was to deny you tasting notes information and force you to develop you own opinion. Then you could log on to their website and see how close you got to their scotch master’s notes. Scotch and a show!

We all waited to try it together, with my aunt Paulette insisting on bringing her beloved Glencairns in which to sip it (I got no beef with a good Glencairn, but a traditional nosing class has always served me fine.) The pressure was on — I’d actually have to put my scotch acumen to the test. Here’s what I thought:

I’ve never been a huge Glenlivet fan (with perhaps the exception of the Guardians Chapter) finding most of their drams the archetype of a simple Speyside. Sweet, easy-sipping, decent intro scotch and a good bottle to have around for company. My thought was the Glenlivet Code was going to be an opportunity for Glenlivet to really break out of its mould and get kinda weird, and I was pretty hopeful after seeing the relatively robust 48% ABV. Boy was I wrong.

Code pours a lovely gold that offers no clue to it’s oak treatment or age. On the nose it’s a classic Glenlivet — sweet and haylike, with notes of green apple, vanilla and almond extract. There was also a touch of raw honey, and something a bit brighter; I hesitate to say citrus, but something akin to it.

The taste is, well, good. But only good, and for all the gimmicks (and the $200 price tag) I was hoping for a bit more. The most satisfying part of Glenlivet Code is undoubtedly the texture which is rich and oily. As for flavour, the almond extract intensified for me and was the star of the show. Behind that was a kiss of caramel and a slight tartness (I’m gonna say green apple again.) My mom mentioned a touch of plum, which I don’t think is way off either. The finish is nice and long, smoothing out to butter, caramel and dried fruit — all very subtle.

I'll reiterate once more I love having a scotch-sipping family. The Glenlivet Code was far from an unenjoyable whisky, but it seems the price is more for the gimmick then the scotch, which is very run-of-the-mill Glenlivet.  Still, for the spectacle and the tasting experience, it's one I'll look forward to sipping slow again.

Flying Monkey's Sparklepuff Triple IPA Dazzles, Even As it Inebriates