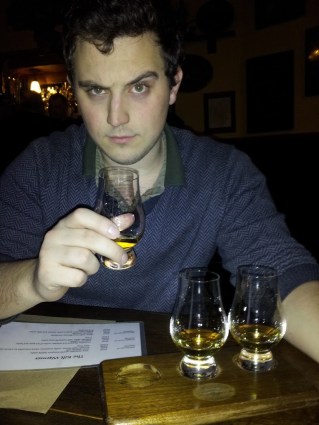 Chicago turned out to be a damn good place to get a drink. Bars abound, and the price of alcohol there makes a Canadian want to weep walking into an LCBO. Needless to say, I indulged readily and frequently. Near the hotel I stayed at, one place in particular looked like an opportune watering hole. It was called ‘The Duke of Perth’ and boasted Chicago’s largest selection of single malt Scotches; hardly something I, as a fellow of Scottish ancestry, could pass up. The bar menu offered a selection of different Scotch tasting trays, but the one I selected was called ‘The Kilt Warmer.’ The selection included the 15 year old Dalwhinnie single malt, the 12 year old Cragganmore single malt, and the 10 year old Glenmorangie Original single malt. While my Scotch palate remains sophomoric at best, here’s what I gleaned from three good Scotches.

Dalwhinnie 15: This was my first ever tasting of Dalwhinnie, and I must say I was thoroughly impressed. It was one of the most aromatic Scotches I’ve ever smelled, with loud floral notes, vanilla and a bit of earthy peat on the nose. The body was fairly light, but it had an interesting, and not unpleasant oiliness about it that I was unaccustomed to. The Dalwhinnie had a fairly sweet taste. I’d describe the flavour as something akin to fresh baked beer-bread slathered in organic honey. This sweetness was nicely amalgamated with an earthiness towards the end. The finish was all peat and honey, and seemingly endless. All in all a fine beverage, one which I hope to taste again.

Cragganmore 12: While I have tried the Cragganmore before I was… er… slightly indisposed from a variety of other fine fluids at the time to do it justice. This time I buckled in  for a fair tasting. The nose was delicate and complex, with  notes of mild flowers, and mown lawn. It reminded me of my backyard in August. The body was light and quick, off my tongue in a second, with a fantastic firm texture. The taste was woody and herbal, with a bit of the flowers from the nose present, and a pleasant sweet-smokiness, like a mild tobacco. The finish was fairly long, but not nearly as long as the Dalwhinnie. Delicious, definitely one of the tastier Scotches I’ve ever had.

Glenmorangie 10 Original: The Glenmorangie Original is a classic for me, being the first single malt I ever tasted. Still to this day one of my favourites, this was my first opportunity to juxtapose it with some other single malts. The nose was familiar and very sweet, with lots of vanilla, and a refreshing kick of a spice like nutmeg. The body was the heaviest of the three, but not overly flabby. This Scotch was like eating a butter-tart, thick, sweet and delicious, with lots of butterscotch and pecan flavours. The finish was medium-long, with lingering notes of spice. I continue to consider this Scotch one of my old favourites, but it is a great deal simpler than its counterparts in this tasting.

Scotch isn’t for everyone; that is to say, infants and young children exclusively. With proper dedication and a bit of experimentation it is possible to expand your horizons and really develop a love for this fantastic Scottish beverage. Sample a few, take some recommendations, and sip some Scotch slow. 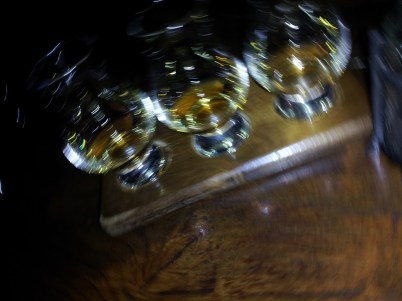