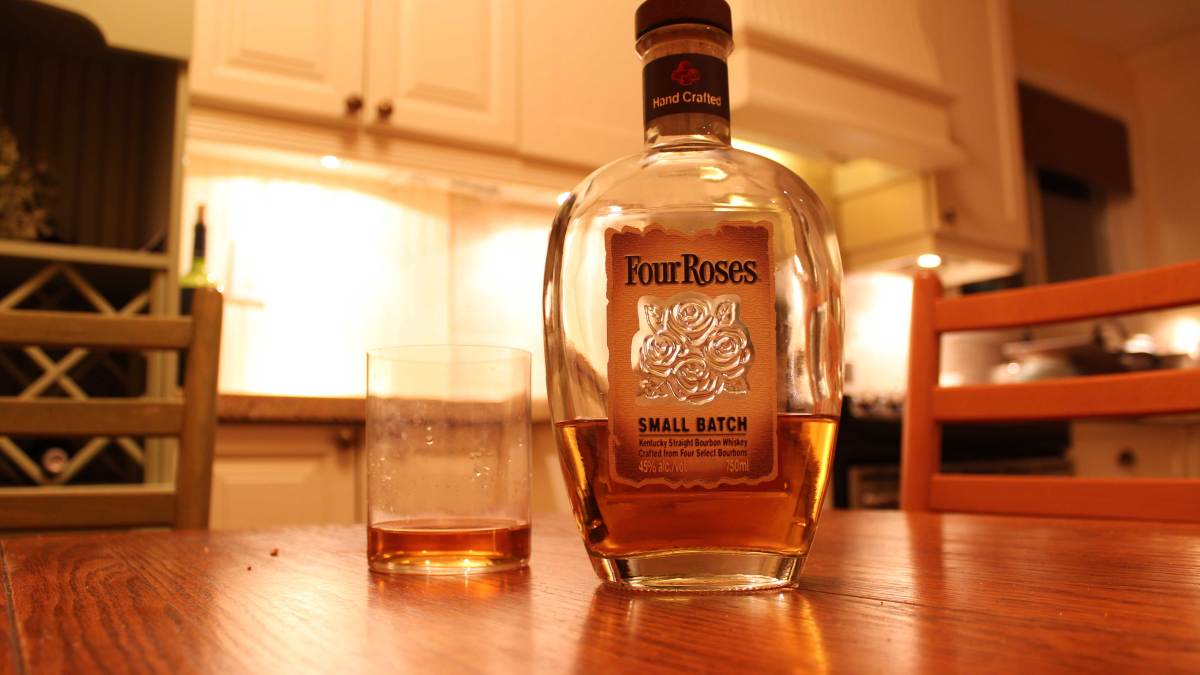 Four Roses Small Batch bourbon has forced me to undertake an overhaul of my bourbon rating system. Previously, I was handing out high ratings to bourbon like I was giving away business cards at an ’80s leadership conference. As it turns out, I just really like bourbon, so I’ve had to re-evaluate my scale. Four Roses Small Batch was the instigator of this change because I realized my scale wasn’t big enough to give it the mark I wanted to, and still leave room for even better bourbons (of which I’ve been assured exist.) The moral of this story is, Four Roses Small Batch is one hell of a delicious drink.

Everything about this beverage makes it an attractive purchase. From its beautiful bottle with the classic four roses embossed in glass, to its rich amber colour, to its immensely affordable price tag (coming in under $40, like another favourite of mine, Buffalo Trace), Four Roses Small Batch just demands to be purchased. It certainly hooked me — I wasn’t even in the market for bourbon when I picked it up, but boy am I glad I did.

It pours a beautiful gold-amber, perhaps a bit lighter in colour than some of its Kentucky kin. This doesn’t mean it’s lighter in where it counts, though — at 45% alcohol, it definitely reminds you it’s a stiff drink. On the nose it has a rich corn-like sweetness, with baked bread slathered in honey. The fumes are most certainly potent, but I wasn’t eager to take my nose out. After they subside, Four Roses Small Batch has a stimulating spiciness to it, like allspice and nutmeg.

But on the tongue’s where it counts, and Four Roses Small Batch is no slouch. It’s not as intensely charred as other bourbons I’ve tried, instead settling for a rich corn and malt flavour. Four Roses Small Batch doesn’t content itself with just sweetness though — the vivid spiciness on the nose is translated into a kind of fresh-cut cedar flavour, with a creamy fruitiness, almost like a peaches. It’s absolutely well-balanced, the flavours play of each other to near perfection. If you prefer our bourbon with ice or water I recommend you skip it for this bourbon — Four Roses Small Batch works in subtleties that are best appreciated neat.

This bourbon was good enough to change my whole rating system. I learned that I can’t assess it like I do scotch — the bang for your buck is just too different. Still, no matter what bourbons I try I’m confident Four Roses Small Batch will be one I return to time and again to sip on slow.

Check out the legend of Four Roses on their website here.