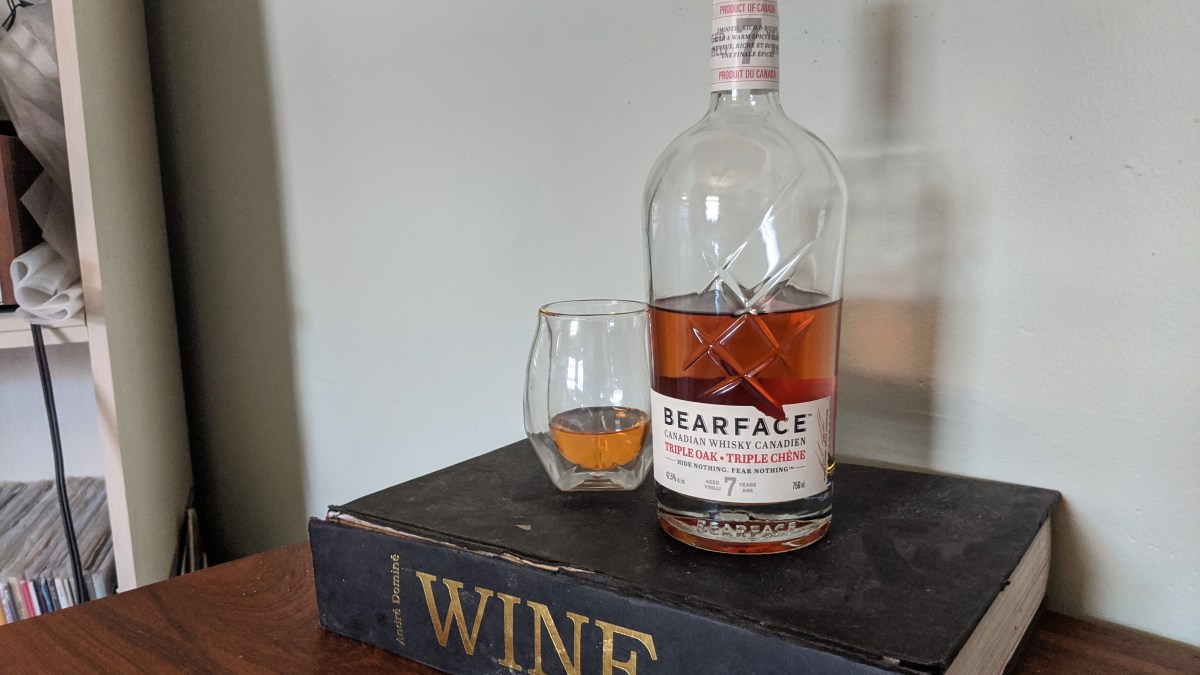 Think of a Canadian whisky. I wouldn’t be surprised if Canadian Club, or Crown Royal popped into your head. The taste of those whiskies — or rather the lack thereof — is the hallmark of a dram from the true-north-strong-and-free. That is to say, boring as all hell (and not really that great.)  This is not the case with Bearface Triple Oak Canadian Whisky and I’ll explain why in a minute.

Now, of course there are exceptions to the doldrums of Canadian whisky. I have waxed poetic about the solid Northern Harvest from Crown Royal before, and gushed about the strange, sherried Dark Horse from Alberta Premium. It’s not that Canadian Whiskies can’t be good, it’s just that so often it’s almost like they choose not to be. Or, at least the mainstream staples so define the genre that it’s risky to venture off the beaten path.

This is precisely why I was interested to try the 7 year old Bearface Triple Oak, which bears the distinction of having an age statement (rare for Canadian whiskies) and being aged three different oaks, including ex wine and bourbon barrels. Weird — and exciting. Here’s what I thought:

The first thing I noticed about Bearface is the bottle. It doesn’t look like a Canadian whisky — it looks more like a niche bourbon with it’s snazzy design and cork top. Once in a glass the differences only compound. While it pours a rather rich caramel-colouring, the aromas explode. Tons of dried fruit, a punch of flowers, and a healthy amount of the wood are all clamouring for attention. It’s a bath-bomb of a whisky no doubt.

The flavour is slightly more subdued, but not by much. Bearface has a lovely, oily mouthfeel that is a suitable platform for it’s intense flavours of blackcurrant, raisins, and spicy wood. I have to assume this unusual profile, which reminds me a bit of this whisky is on account of the wine-barrel aging. There’s very little alcohol bite, even at it’s respectable 42.5% ABV.

Once the original caucophany fades a bit, fans of sweeter whiskies will be pleased, although I found it drifted towards the “cloying” side of things after a couple of sips. The finish was a little bourbony, perhaps a nod to its time spent in ex-bourbon casks, and pleasantly long.

If I’m being entirely honest, this isn’t going to be a go-to whisky for me. It’s got a ton going on, and will certainly be someones new favourite dram. Perhaps I’m a bit boring — I’m just glad Bearface isn’t. It breathes new life into a tired lineup of Canadian whiskies, and I hope it’s often and well imitated in the future. Bearface Triple Oak does a lot of things differently, and it does them well. It's not up my alley, but if you're looking for a new dram, this is definitely one you're going to want to sip slow.