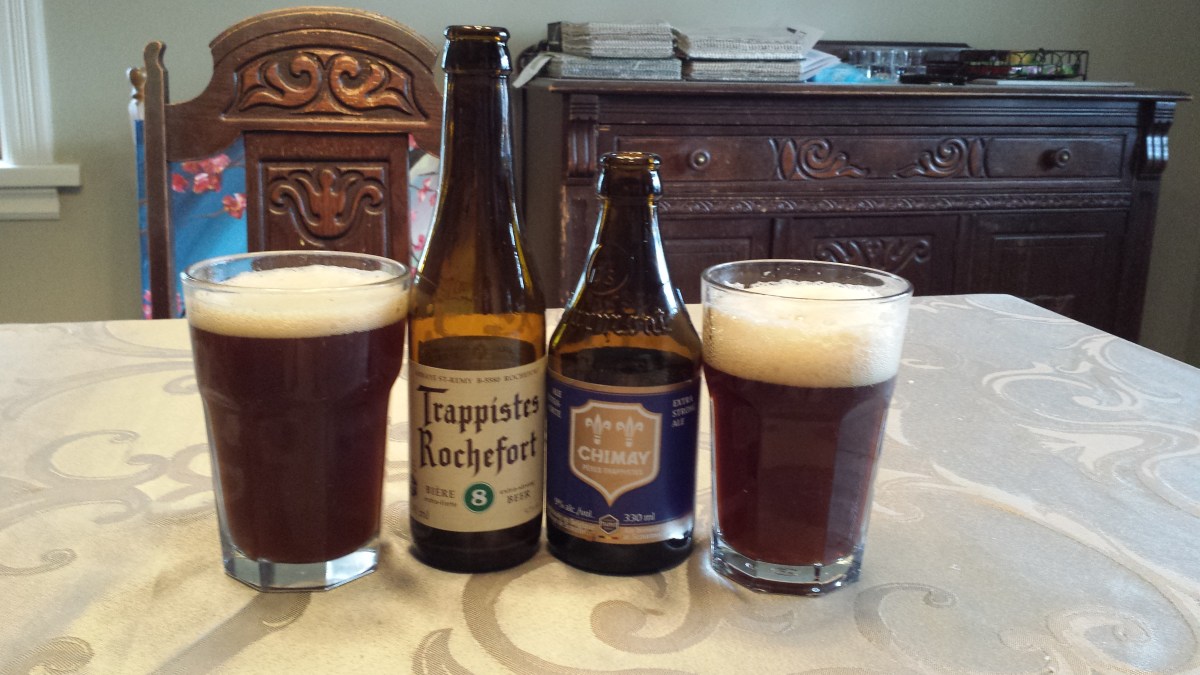 There’s nothing quite like a Trappist ale. Boldly yeasty, intensely fruity, lushly carbonated and indulgently alcoholic, these beers are a class unto their own. Not just any brewery can call itself Trappist either – no, in fact there are numerous strict qualifiers, which leave only 10 authentic Trappist breweries in the world. Two of the most famous (and easiest to find) examples are Trappistes Rochefort 8 and Chimay Bleue. Both of these Belgian beers boast a staggering rating of 100 for both style and overall on RateBeer.com (as you can see in the above links), so it’s pretty much indisputable that they’re really good. The real question is which is better? I pitted them head to head in a battle of the Belgians to determine an answer.

My love for Trappist ales began with Chimay Bleue. A novice to beer, I was trying everything that came recommended, and Chimay Bleue kept finding its way into my sights. I’m glad I did try it, as I continue to enjoy it to this day. It’s got a vibrant, lacy head that takes quite a bit of time to dissipate. At 9% beer, Chimay doesn’t kid around – it’s a serious drink, as its deep brown, opaque colour attests to. On the nose, it has the floral, yeasty character of classic Trappist Ales, with perhaps a bit more earth than some of its peers. Vibrantly effervescent, Chimay Bleue is a lively drink, possessing notes of warm fresh bread, McIntosh apples, and cut flowers with a solid backbone of earth. There’s no doubt this beer earns its prestige. However…

…the Rochefort 8 is undoubtedly better. It’s a shade lighter in colour, with a much more lackadaisical head, which disappears relatively quickly. This is due to the much softer carbonation, which affords it an incomparably lush texture. On the nose Rochefort 8 is a cornucopia of scents – bright citrus, dried fruit, flowers and ginger all contribute to its intoxicating odour. The taste is even better, with raisons and chocolate being cut with just the right amount of lemony undertones. I know it sounds like I’m waxing poetic (I am), but I never realized how good Rochefort 8 was until I put it up against a beer in its weight class. Coming in at 9.2% alcohol, Rochefort 8 isn’t a sissy Trappist Ale (nor does one exist, really,) but it backs it up with a ton of flavour that takes centre stage. I had two other people with me, neither of whom particularly enjoyed beer, but both preferred and even liked Rochefort 8, over Chimay Bleue.

I’ll love any good Trappist ale I get to try, but these two will always remain among my favourites. While Chimay Bleue began my passion, Rochefort 8 has proven itself the better beer. I recommend picking up both of these big Belgians and seeing for yourself just how good they are to sip slow.

Check out another close Head to Head between to great Ontario Imperial Stouts here.