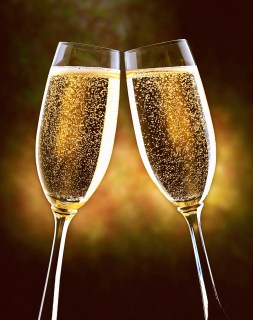 The new year has long been an excuse for me to spend too much money on a bottle of champagne, and this year was no exception. The only difference was, I intended to share it with my girlfriend Christine, who had the terrible misfortune of being on a sun-baked beach in Costa Rica when 2014 was rung in. Thus, we decided to have a pre new years get together, replete with a bottle of Veuve Clicquot Brut Champagne and the best damn risotto I’ve ever made.

Champagne has become linked to the idea of celebration in North America. This means that it is often paired with desserts or other sweet foods. But in other parts of the world, Champagne and sparkling wine are drunk on a more day-to-day basis, and thus paired with everything from sea-food to pastas. The bracing acidity of a brut champagne compliments a rich, creamy dish far better than a sweet dessert, so for this “pre new years” I intended to pair it perfectly. After some research, I settled on a bacon Parmesan risotto, topped with a poached egg, (the recipe can be found here).

I’ve always loved to cook, especially when I get to flex my fancy. When Christine arrived, I tried to appear suave as I poured us two flutes of champagne to enjoy while I tended to dinner. I did a brief tasting of the Veuve, and was reasonably impressed. It was vibrantly acidic, with some nice notes of citrus and bread dough. All in all very pleasant, but far from the best I’ve ever had. Christine enjoyed it as well, although it was obvious her attention was more focused on the sizzling bacon than the drink.

To be honest, I lucked out with the risotto. While preparation of it was relatively simple, it required 3-4 pots and pans simultaneously simmering on the stove. Stretching my faculties to their very limit, and drowning any concerns I had in champagne, I was somehow able to keep the rice from getting soggy, the bacon from getting burned, the chicken stock from boiling over, and the eggs from over cooking. All in all a rousing success that was definitely influenced more by luck than skill.

After plating, Christine and I sat down to enjoy our meal. Our flutes were topped up and after a few delicious bites I tried a sip to see how it paired — and it was absolutely wonderful. The crispness of the champagne was doubly refreshing juxtaposed with the rich risotto. Its flavours almost seemed to be magnified, as were the food’s. Never in my life have I experienced such a perfect food pairing, nor have I had such a pleasant new years celebration (albeit, before new years).

Christine and I concluded the evening with some gelato and a viewing of Lord of the Rings. The dinner was just about perfect, and though Veuve Clicquot isn’t my favourite champagne, it seriously contributed to one of my all time favourite evenings. 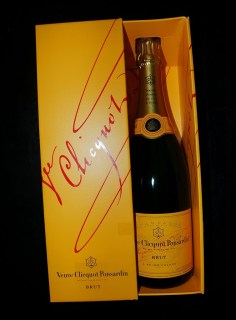 Watch This Wine: Viognier is In Vogue